A Review of Sexy As Hell by Andrea Laurence 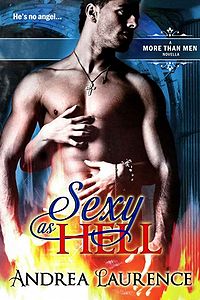 Sexy As Hell by Andrea Laurence

One of the things that does need to be in a story is some kind of conflict, but also some kind of consequence. There needs to be a rewards for winning, a fate for losing, and most importantly, that risk needs to amount to something.

When that risk, the tension, the possibility of danger gets cut off almost as soon as it appears… That’s a real problem. It shouldn’t. Especially when a Succubus, one with real personality appears in that role of danger…

Strong, sexy and powerful… the kind of man every woman wants in her life and in her bed. But these men are more. Oh, so much more.

Seth gave up everything to circumvent death, including his freedom. Now he’s an immortal warrior serving the Archangel Michael. But Seth has been compromised and he may finally earn his life back. He’s just got to send one sexy, stubborn succubus back to hell.

Camille always thought her neighbor was mysterious and handsome, but she never imagined what kind of work really kept him up so late. The succubus Isra has targeted Seth and she has taken Camille as her host as a surefire way to get to him. Isra has twenty-four hours to seduce Seth and steal his immortal life-force by the most pleasurable means necessary.

The clock is ticking…

Seth has a problem. Actually it’s two problems in one woman’s body. He’s attracted to his neighbour Camille, but cannot be with her because of who and what he is. The bigger problem is that a Succubus has fingered him and Camille as targets, and Isra, the Succubus in question, has possessed Camille and is going to use her to take Seth’s soul and in the bargain stay on Earth for a very long time. Considering that Hell isn’t the nicest place to be, Succubus or not, she’s determined to win. But then, so is Seth.

There are quite a number of plot disconnects in this work that nagged at me as I read. The first one is that Seth is very much aware that Camille has been possessed by a Succubus. Not only does Isra shape a dream that lays that out clearly, but then the archangel Michael appears and tells Seth, quite bluntly, that Camille has been possessed, if the dream didn’t give him a clue. From the moment this happens, Isra really has absolutely no chance of succeeding in her plans because Seth knows what he’s going to be facing.

Then, to add a layer to the “almost but not quite” relationship  between Camille and Seth, Michael offers to allow Seth to become human again after he frees Camille. This of course is a bit of temptation and need in Seth which adds back in some of the tension that was taken away a moment before.

Seth confronts Isra and, of course, she is assuming that she will be able to fool him easily with the trap she lays out for him. But it is a foolish stupid trap for a Succubus that is supposed to be one of the best there is. All she manages to do is make certain that Seth can safely disarm her, move her to another location, and then deal with her.

What follows is simply a situation which Isra acts like a stereotypical Succubus for most of the story, does almost nothing seductive, rather trying to play upon the male view of a wanton woman to the best of her ability. The battle between them goes back and forth, and while there are a few moments of Succubus mind control that I thought were very hot, in the end there isn’t really a danger for Seth or Camille. All they need to do is wait.

And that becomes the core of the story. A waiting game. One with a singular ending that just falls flat for all of the buildup and tension that came from the beginning of the work. What’s more troubling is the plots that are tossed aside as the story ends. The promise of release for Seth isn’t resolved, the relationship between Seth and Camille flickers to live, barely, but where it goes we have no idea at all.

It felt like the author had a really good concept and characters but when push came to shove the story took the easy way out, didn’t really challenge anyone or anything, and just… was. The one thing that I really enjoyed, when all of the over the top sexuality from Isra was tossed aside, was her character and what she thought and said to Seth during their waiting game. Honestly that captivated me more than anything else in this work and I wish there had been more time given to making Isra’s attempt to overcome Seth more than just a “come-hither” look and not a lot else.

While the work is written well, and there was nothing that really took me out of the story, I felt like the work rushed from crisis to crisis far too quickly and it didn’t need to do that. If Isra would have been more sneaky, seductive… more femme fatale in nature, that would have added a lot to the work and could have made for more jeopardy for Camille and Seth.

What if Camile had slipped into being more Succubus-like? What if Seth hadn’t been warned about Isra and she pounced on him in the building’s elevator or something? There are so many ways and possibilities for Isra to be more than a blow-up doll and that didn’t happen. Really it needed to. Badly.

The biggest problem in this work was how Isra was neutered as a Succubus within the first few moments of her appearing. It was a shame that all of that attitude, seduction, and power she could wield was so rapidly removed by Seth. From that moment onwards the work turned into a discussion over coffee with the occasional nip of Succubus sensuality…. It should have been a lot more than that. Seriously.