A Review of Beware the Bogeyman by Judith Post

A Review of The Wielder: Sworn Vengeance (Bonus Chapter) by David Gosnell 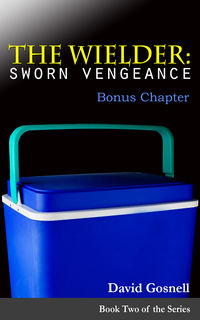 I’ve been following the series The Wielder by David Gosnell for some time now. You can find my reviews of the two works in the series so far here and here and I do recommend the series quite highly as well.

The third work in the series will be coming… soon… I have heard from someone that would know… and I do look forward to that appearing by far. David shared a bit of story that didn’t appear in the second work recently and I thought I would share a few thoughts about it. The question of what eats at one’s conscious is a rather interesting question. There are some that can deal with it, some can’t and then, sometimes, there are those that are pushed… in a way.

This is a chapter that was edited out of the final manuscript for The Wielder: Sworn Vengeance. An obvious warning: if you haven’t read Sworn Vengeance, this won’t make a lick of sense to you.

But if you have, it does address a few questions. It also shows that Arthur wasn’t the only with vengeance on the agenda.

This short is provided as a “happy” for our readers. Well, maybe happy isn’t exactly the word to use about this short bonus chapter. You’ll see.

It’s a bit hard to talk about this little bit of story without giving away a lot of what happens in the book itself. So I don’t delve into the details too specifically here. It is a story about Znuul, a rather “evil” dragon and Karen, the one that tempers him. It tells of finding the one that made some very bad things happen, confronting them, and yet still managing not to turn the corner into betraying oneself.

The chapter ties up a loose end in the book, one that I did wonder about, and the reasons why things transpired as they did. It quite neatly offers the answer and in doing so it also shows something that hovered in the background in the main work that wasn’t quite so obvious I felt. It does tie up a loose end, and really well in that. There is a bit of “Znuul mind games” that goes on in the story, but I think that worked well and didn’t feel like it was out of character for him or what he represents.

As such I think it really should have been popped in somehow if for no other reason than to allow a bit of closure what with all else that was happening. While it does have a bit of finality, it also puts Karen and Znuul into a slightly different light through the rest of the story as it stands and I think that might have been interesting as to where that pushed my thoughts about the story.

Interesting, a well managed scene, and well told. Perhaps a teeny bit short for a chapter, but nonetheless a story of what one does for family when you have nothing else to give.

I do think that this chapter really should have been inserted into the second book for the simple reason that it answers a question that was quite nagging when all was said and done. It tells something about Karen and Znuul that needed to be said. Sometimes family is all we have and it is, truly, something that you would do anything for in more ways than one.