A pair of Work in Progress YouTubes of Succubus Art

A Review of The Sorceress Next Door by Anya Merchant 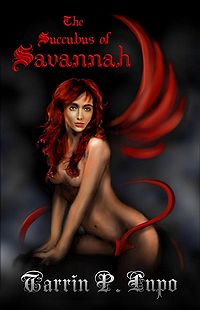 The Succubus of Savannah by Tarrin P. Lupo

I’ve run into a bit of a problem of late and it comes to this: There have been quite a lot of novels written lately about Succubi and I haven’t really been keeping up with them all. As such, here and there, I will be reviewing two novels on my book review days from this point going forwards.

Now, I have a lot of books that have been released some time in the past that need to be reviewed as well, so what will likely be happening is that there will be an older book and then a newer one reviewed. This won’t happen all of the time mind you, but more often than not I expect.

As well, with Lost Girl coming back this evening, there will be some double Tale posts on Fridays as a result. I’ll see how this all works, I think I’ll manage this, but… we’ll see…

Onto the book review:

The thing which I personally like to see when these lessor known tales appear is that they are not the means to an end, but the means to a better story…

For in the end, isn’t it the story that matters?

William Garrett lusts after the woman of his dreams, but what happens when those dreams become reality? Sometimes getting everything you want can be a living nightmare….

William, better known to everyone around him as Will, has a problem. His dreams are getting in the way of his life in more than one way. He dreams of a woman that takes his breath away and it is beginning to effect his wife, his work, and more. Then something odd starts to happen with the women he works with, and things get stranger from there on.

Overall the story itself is interesting. A Succubus-like being entwines themselves into the lives around them in search of something very specific. As time passes, their effects become quite clear on the men and then the women as well. The men become weaker and the women are drawn to them. One woman is not and by the end of the story has figured out what they are. But by then the Succubus has what they want, and the other shoe drops.

The thing of that wanting is… It really turns out to be a very petty thing indeed. The reason for what the Succubus does seems so out of balance with what happened to them that when it appeared, I found myself disappointed in the turn of events.

There is a lovely undertone of mind control and manipulation which the Succubus is responsible for that is nicely played out. It fits with what they are and what they need from those around them. The problem is that while that is played out, the barest bits of who they really are comes out.

There is a lot of misdirection and confusion from the characters as all of this happens and that’s a bit of a problem. As the main character and most of the others are police, I expected somehow a lot more… attention to detail from them. From the first moment they appear it is obvious that something is very wrong with all of them, and the one person that knows something is wrong is brushed off.

At one point there is proof, clear and undeniable, that things are very wrong, but the confusion overwhelms all of them and they miss it. While that is part of the Succubus’ power, I was somewhat disappointed in how quickly things went from a slow reveal to a very quick resolution of the work and straight into an ending that felt rushed to no end.

It is that ending, the event that happens to William that concerns me. It isn’t so much what happens, but rather why it was that the Succubus did not simply take what it wanted from the beginning of the story? They knew who William was, where he lived, and what they wanted was there with him. So why was it that the climax of the story came to a short “You are the one” scene followed by a short chase and then the aftermath?

I realize that I have more knowledge than most, but the ending was telegraphed within the first two scenes of the book, the only thing that I didn’t pick up on was why William was the target of the Succubus…

Truthfully, I think there should have been a better reason than there was here.

A really interesting premise that made good use of the myths of Succubi and one of their more traditional forms. A bit of telegraphing of the end of the work, but I can forgive that. What I can’t quite manage to is the plot hole which really didn’t make a lot of sense and bothered me to the end of the story…