A Review of The Sorceress Next Door by Anya Merchant 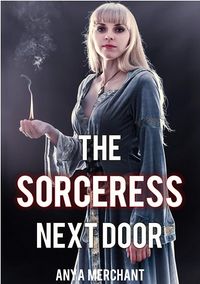 The Sorceress Next Door by Anya Merchant

I’ve run into a bit of a problem of late and it comes to this: There have been quite a lot of novels written lately about Succubi and I haven’t really been keeping up with them all. As such, here and there, I will be reviewing two novels on my book review days from this point going forwards.

Now, I have a lot of books that have been released some time in the past that need to be reviewed as well, so what will likely be happening is that there will be an older book and then a newer one reviewed. This won’t happen all of the time mind you, but more often than not I expect.

As well, with Lost Girl coming back this evening, there will be some double Tale posts on Fridays as a result. I’ll see how this all works, I think I’ll manage this, but… we’ll see…

Onto the book review:

Heat in a story is what you expect to find when the work is described as erotica. There’s a right way and a wrong way to write erotica and that, for the most part, is really a matter of taste. Where there isn’t much in the way of wiggle room is editing of a work so that it sounds right and reads right. There will never be enough heat to overcome glaring mistakes in writing that aren’t corrected for the sake of the sex scene they are attached to.

That is really a shame when the story is interesting, the heat is really well done and the Succubus herself is a mystery…

It always feels warm to Dan when he walks by the house of his neighbor, and after being invited in on a calm winter morning, he discovers why. Stella is a woman well versed in the hot, sexy realm of magic, and before Dan knows what’s happening he finds himself and the women closest to him being pulled into a tumultuous whirlwind of lust and desire.

Dan meets his new neighbour and after touching something he shouldn’t have, notices certain things around him that weren’t there before. One of them happens to be a Succubus who decides that he needs a bit of excitement in his life. So does his new neighbour and that’s when things start to get a little out of hand.

Dan is, as a whole, a bit of a lost soul in this story. There’s all kinds of erotic thoughts that swirl in his mind that he’d never act upon, but when the Succubus appears, all bets are off and things get heated up really quickly. He is rather quick on his feet, for the most part, and that makes for some quirky and embarrassing moments for him. However when one part of his body starts doing all of the thinking for him, his personality gets buried in a lot of moaning and that’s really a shame for the story that leads to the erotica.

Stella is a witch with a exhibitionist streak about a mile wide which leads to some cute moments between herself and Dan that tie the two of them together. She has a strongly presented personality in which she knows what she wants and what she can do. At times she’s a bit full of herself and that gets her into a situation which could have gone really badly, but Dan’s personality manages to get them both out of that mess and, I expect, into many others.

The Succubus of the work is never named, but I really found her to be more mischievous than anything else. She didn’t appear to be at all stereotypical, which only added to how much I liked her overall. She is controlling and her own needs do sometimes get the better of her. She just turned out to be sort of a cross between an sex elf and a ghost which, when Dan comes in contact with her, makes her image in the story very erotic, not evil, and that put the right tone to the entire story from the beginning. It’s about having some “fun” for the sake of doing so and what mischief that creates.

The heat in the erotica runs hot and cold, depending on the characters and the situations they are in. Personally when Dan and the Succubus became more than intimate I think that was about the hottest part of the story by far. There is a bit of taboo erotica as well, which was well written, and another scene that had its own heat as well, but really they weren’t quite as hot to my tastes.

I liked the story as a whole very much, I like the universe this author has created as well. There’s a lot of opportunities for stories to be told and if the Succubus remains around for a time, that could make Stella and Dan’s lives very interesting. Good characters, lovely heat, and a story that kept my interest. But there’s a problem.

The work needs some editing to remove a lot of minor, silly mistakes and errors. Some of the dialog seems awkward and stiff in that reading it out loud it just sounds wrong. As well, mistakes such as: “There are tons of snowplows that would do the job for cheap.” or “he smiled at him and offered up a suggestive wink.” where it is a she that is winking, are a problem. The mistakes seemed to be more evident as the erotica almost upon the story and it felt like there was a rush to get there. As such some of the grammar and spelling went by the wayside and that, for me, is always a problem.

I really like the idea of this story and as it appears to be a series going forwards I do hope that the Succubus reappears just to see what mischief she brings once again. One of the more interesting and unique Succubus stories I’ve read this year by far. The only problem is the editing. That really needs to be done again to make this so much better honestly…