A Morrigan and Lilith Aensland YouTube with music that works…

Today marks Seven Years of the SuccuWiki and 3,000 articles

A Review of Savion and the Succubus by Sara Kane 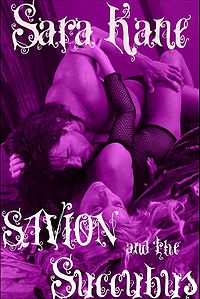 Savion and the Succubus by Sara Kane

Some stories have the creation of a Succubus as a curse. The way that happens varies, of course, but sometimes the larger question to ask is: Why was she cursed in the first place?

What follows from that question can be so much more interesting than the curse itself. After all, history, especially the history that makes someone who they are, has a way of returning again…

Fallon, succubus assassin, will do anything to find her missing daughter–even take a contract on the only man she’s ever loved and ever desired as something more than prey for the demon she’s become.

Savion Ardennes, alpha werewolf, isn’t surprised when he discovers the woman looking for her daughter is really a succubus sent to kill him. Many have tried and many have failed. But this one will succeed because he can’t stop touching her, or living the fantasy that she’s the woman he loved and murdered all those years ago.

Guilt and betrayal are wielded expertly by black forces trying to destroy them both. Can Savion and Fallon overcome the darkness and find the light of truth that will lead them home to each other?

There are many different kinds of supernatural beings in this work. Vampires, werewolves, demons of all sorts. But only a single Succubus, Fallon. She has no horns or tail, but she does have the ability to enflame the desires of others and beyond that turn them quite literally into ashes when she is finished with them. She’s placed her real self far into her past, pushed her true self into a corner and locked it away so that she can survive and it has worked so far. At least until she takes a contract and finds herself facing the man, now werewolf, that made her into what she is. But she can’t hide that she still loves him, even if it costs her everything.

Fallon I found to be interesting for many reasons, but the one that I particularly enjoyed was the descriptions of her using her power, reaching out to those around her and what effect she has on them. When she cannot control her abilities and things go a bit wild, the moment was very striking and stayed with me throughout the rest of the work.

The work has many threads running through it and paying attention to each character as things progress is a must. It does become slightly confused towards the latter third of the work when certain truths are revealed and some very unexpected changes happen.

While there was much told about Fallon, her daughter is for the majority of the work a mystery. That is a shame really because she didn’t feel like part of the story save for a means to draw Fallon into the situation she was in. When things happen in that thread, they seemed very rushed and… incomplete.

Savion is a werewolf, the leader of his pack, and still holds within him the need for who Fallon was. That need is cloaked beneath an iron persona, which it must be of course. Still, when he comes into contact with Fallon he knows there is something about her that is familiar. It is that familiarity that drives much of the story forwards as each of them sidesteps the other, the secrets swirling around then both.

The level of plots and mechanisms that have been swirling around them, and many others, really is very intricate and well designed so they their actions, their choices, do not see out of place or strange as the story develops. When everything breaks, the piece match up really well and while there are two moments that felt slightly odd, overall the climax of the story is delicious.

Fallon’s personality, her drive, the way she stands up to those around her, occasionally making them do what she wants, mainly driving many of them to dislike her in spite of themselves really makes her a force. It is that force of personality that makes this story so much more.

The end of the work closes the door on Fallon, things change for her and when they do I have to admit that I was slightly disappointed in that. I thought, based on one vital moment that Fallon and Savion share, that she would not change from what she is, but she does change and in that the story of a Succubus comes to an end.

But, and this is the important point, there are open doors to new stories from this world… But they never appeared and that is a real shame.

Really there was much to like about Fallon, the ending felt right, but there were so many open doors to explore that haven’t been… and likely never will. The bigger shame is that this work isn’t available any longer. It really was well worth the read…