A Review of The Succubae Seduction: The Generator by J. Sselxuyt 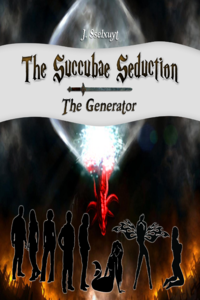 The Succubae Seduction: The Generator by J. Sselxuyt

A good story tells of many things. It tells of characters finding themselves, who they are, what they are, and what they mean to others. This isn’t simply something that is central to the lead character of the story, it is something that needs to be touched on, and touches, those that aid, travel with, fight alongside, or become something more than simply part of their lives and loves.

The same is true of those that press against them, fight against their goals or, sometimes, reveal that the world that once seemed ordinary isn’t that any longer. The discovery that one has a soul, that it matters, and in discovering that truth they come into their own is important. But it is every bit as important to find one’s soul one also finds the love to share it with others completely.

Lydon lives the life of drudgery. Every day it’s the same thing, overworked by an overbearing boss, just to try and make ends meet. That is, until a seductress that only he can see shows up and throws his life into chaos. Supernatural forces will conspire to use or kill Lydon as he fights to save two worlds. Hopefully he uses the proper brain to face the challenges before him, before those he loves are killed.

Lydon’s life is, bluntly, something that he exists through, but does not live. An odd encounter in his office with a Succubus named Angela reveals who he is, how important, special, he really is and that there is more to his life than he knows. His world changes, then he discovers that there is more than one world, but only one truth that matters. Finding that truth in his life changes the loves and lives of many around him. The rewards are many, but the costs are too.

Lydon’s story is involved, taking many twists and turns, encountering that which he never expected and, more to the fore, he discovers that his past in truth is unknown to him. It is in that discovery, that searching for his own truth, that he becomes quite a different person from where his story begins. The mix of some unique myths, legends, and stories come to make him realize things about himself, but also to see, in time, things somewhat hidden from his eyes.

The transformation Lydon undergoes, for which Angela is at the core of much, but I will return to her a bit later, brings myth to reality in many ways and his ability to deal with that is a fascinating thing to watch develop over the course of the story. As he “becomes” there is a bit of a hint of the power of an Incubus in him, though he isn’t really one. And it is that explanation of what Lydon is, what he can do, and what opposes him that adds a lot of depth to the story. Lydon draws quite a group around him, mainly women, and there are many moments which turn into some lovely hot flashes of passion. But in those moments his love for all of those around him, in all of the ways that can be expressed by deed, words or actions, brings out unexpected parts of their characters which makes even the most minor of characters mean something to the story.

As such, there really isn’t such a thing as a character that doesn’t matter in this story, there is a purpose for each of them and to find out what that is in time, when it is revealed, makes the journey they all take with Lydon that much stronger.

The Succubus of the work is named Angela and her arc in the story is an amazing one that takes her from being “just a Succubus” to something more. Something better and in becoming Lydon’s truth, she finds a part of herself that she lost. When that is told, when her real self comes out and Lydon sees within her all that she has been through it is tragic, so desperately so. In spite of how she sees herself, in spite of “just being” who she is, that changes because of Lydon. I do adore Angela very much and while there are some twists and turns in her story, some of which are completely unexpected in their meaning and result, she does hold one promise to herself. One truth that is shared with Lydon and the other women that are close to him and love him dearly.

Besides Angela and the lover of Lydon, there are others that do not necessarily love him, but do act in a way as guides, teachers, and protectors. The ensemble of characters fills out into a band of adventurers that seek out their individual destinies on the one hand and on the other they strive to find that which they need as well.

Not a simple story by any means, there is much to be told, many moments of joy and passion, love and loss, victory and defeat. The action moves swiftly throughout with quite a few erotic moments in the work that I liked for the love within them, but I also felt there was a problem with just how often Lydon found himself entwined with one of his lovers in the work. I felt as if there was a tad too much in the number of sex scenes in the work. It isn’t so much that they don’t make sense, because they do, it’s more that a bit less I think would have been more. The love Lydon shares is complete and total, there is no doubt at all about that. The scenes are hot little flashes of passion which give a nice break between the adventure itself. The need for Lydon to have these moments makes sense in this story and universe. It’s just that I felt like there could have been a few more moments between Lydon and his loves, Angela especially. I felt like there was a piece of their love not told and that would have been nice to have seen.

The universe that this story is set in is richly told, the imagery and descriptions are really well done and I enjoyed them very much. The work felt like the story was told, from beginning to end, fully and there wasn’t a feeling that the story ended at a point where something more needed to be said. The truth in the story, about giving one’s soul to the ones you love, comes up often, and in that the individual stories of all of the characters are more vibrant, strong, telling.

By the end of the work, there is quite a lot to think about, which I enjoy. In doing so some questions arise which ask about what comes next after all that Lydon and his loves, friends and enemies have endured. The ending feels more like a pause in the story, a chance to catch one’s breath and then turn the page to see where the story goes from there. I felt that Lydon’s story isn’t over, that there will be another part to his story and that interests me. The ending isn’t like the beginning, and it offers a moment that, for me, felt right and true to the characters and their stories.

A truly epic tale of finding good and evil, discovering the truths within each and the strength to believe in the impossible. Strong characters, truly heartfelt passions, and a story that goes places unexpected, wonderful, and more.

I’d like to see more, perhaps someday there will be. I do hope so for the story has more to say and should.