A Review of The Love Of A Succubus by Lady Sakimura 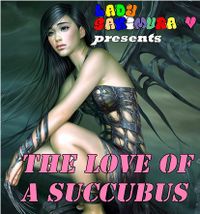 The Love Of A Succubus by Lady Sakimura

The second of two works by an author, they being their initial steps into writing in English… and about Succubi.

In the first review last week I mentioned that work felt like it had been put through a translator and little editing seemed to have been done. Regretfully this second work has the same issues as the first, save for one important point which made it better than the first if only slightly…

The follow-up story to Sucker For A Succubus. In order to satisfy Morgan, his new succubus partner, Eric becomes a half-demon. Things don’t quite work out as planned, however, when he finds that she is only interested in his fresh, nourishing blood. Will she ever know the true meaning of love? Enjoy this short story by award-winning Japanese doujinshi author, Lady Sakimura. This is her second story in English.

Eric decides that he wants more of his relationship with Morgan and after telling her so, she turns him into a demon as well. And things go downhill from there rapidly.

Like the first work, I found this work very hard to read because the text reads as if it was directly translated from Japanese to English with no editing which would make the sentences read better or to make the story better. The words are clunky, the thoughts are scattered and the storyline reads like a comic book that has been turned into a story with the dialog being taken directly from it.

As for plot, this work has one, and it actually is a good idea, but the way the story is told, what happens to Eric and Morgan is just handled wrong. I want to feel emotionally attached to what happens at the end of the story, but to get to that point there is a lot of moments where I just could not find a way to really care about what was happening.

There is, again, a lot of blood, some horror scenes that are typically anime in scope and the appearance of another character, literally out of the blue, serves really no purpose other than to push the story towards a conclusion that I didn’t enjoy.

Difficult to read, odd situations and story, at least several more editing passes would have helped overall. Proofreaders might have been a good idea to help both of these works be more than they are.