A Review of Cedric the Demonic Knight by Valerie Willis 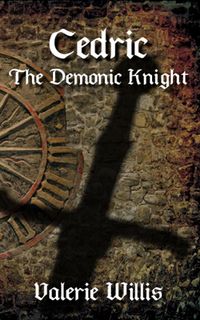 One of the things that seems to be, for the most part, very difficult for beings like Succubi or Incubi, in most stories, is to believe in is that there is something, or someone, for them that could be called a soulmate. It is the moment of their acceptance of that being true, whatever the form that makes a difference to them.

It becomes that much more difficult when the universe likes to play games with them, around them, and draw them into a place where almost anything can happen.

The thing is, in some cases, it can also see to it that they themselves can do anything as well.

Known for hunting the supernatural, no mortal man realizes Lord Cedric is one of Sorceress Morrighan’s abominations. After competing in a tournament, he is wed to a Lady of the Court, Angeline. Cedric’s senses begin to overwhelm him and he struggles to decipher his feelings; Are they a creation of his incubine bloodline or truly heartfelt emotions for the girl who has lost it all to him? He finds himself forced to choose between falling in love or continuing his suicidal quest to kill his creator. Epic battles against all manners of beasts and demons fill this story with memorable antagonists such as Morrighan and her two sisters; Romasanta the Father of Werewolves; Succubus Queen Lillith and many more.

Cedric has a goal, one that has driven him for most of his life. Revenge. In order to have that, he will do almost anything to gain what he needs to have that in his grasp. A chance encounter with Angeline starts them both on a path that neither expected, neither could see the results of, and with all of that… to come to change the world in ways unimaginable.

The most interesting part of this work are the characters by far. While the names of some are familiar, like Lilith among others, they are not quite what one expects them to be. There are quite a number of myths and legends written into and around these characters and in doing so the author weaves a deliciously complex and riveting tale. It’s a refreshing turn of the tale with all of those that Cedric and Angeline encounter, never stereotypical, and in doing so the story rises about a simple adventure story or romance, but into a much more gripping story of the growth within Cedric and Angeline.

At the beginning of the story, Cedric doesn’t quite come across as the sort of character that one might like, if at all. He’s a bit rough, a bit aloof here and there, and, to a point, he’s quite a cad at times. Part of that is his history, there is no doubt and it is a history that is very complex and really one of the most unique stories told that I have read in sometime. As the story unfolds, as Angeline’s purpose and connection to him turns from a matter of “just being” and into “never being without” the change in Cedric is breathtaking. The emotions, the need and want are very strongly told and in that comes reveals about Cedric that while at times are a surprise, they do not step outside of what is known about him, his past, and more importantly, what his future being to him.

He is not completely an Incubus, though it is a large part of him, and with that comes an ongoing internal struggle as the story is told. It is painful at times, occasionally head-shaking, but always tightly told. The reasons for his struggle, the awful past that haunts him and the fear that comes with it are when he is his most human which brings him to being a character that one cannot help but admire for his strength and how he comes to if not cope, then to come to terms with it.

Angeline follows a similar part through the story, going from perceived weakness, to discovering her past, what it means, and what it has done to her. As the story of her relationship with Cedric goes from grudging tolerance into acceptance, discovery and beyond, the strength within her character becomes a mirror to that of Cedric himself. It is her discovering that she is more than she believed, does more than she could have imagined, and, more than that, finds something within herself and within Cedric that answers a question within them both. Angeline’s transformation is as vast and complete as Cedric’s own and perhaps more so.

The work tells of a unique connection between Cedric and Angeline, and in that connection I have to admit that it bothered me from time to time in how it worked and what it did to each of them. But this was consistent throughout the story, and in the case of other Succubi and Incubi that appear, there was no exceptions or alterations in that. It’s important to keep how things work consistent and in this work it is.

Lilith appears in this work and in her appearances she is, just slightly, different enough from the legends that I liked her for what she represented. There is a change in her from when Cedric first encounters her and when she appears again in the closing chapters which isn’t really explained. I really would like to know what changed, why it is, and what that means between the two of them. I think that untold story would be interesting to see.

As Lilith is the Queen Succubus, then Boto is the King Incubus. He is also Cedric’s father and while he is that, there really isn’t anything that connects them together. There is, of course, another involved in the story about Cedric’s father, Morrighan and to other levels and connections, her sisters. There isn’t really much to like about Boto, but then he isn’t really meant to be much in the way of a good character. He is, quite simply, over the top and evil and within that comes a revelation about Cedric that was quite unexpected when it came in the story.

There are quite a number of surprises that appear as the story moves towards its climax. They all could have been impossible or be badly disconnected, but they were not. The plot is complex and one does need to pay attention as the events of the past come into play as the story goes onwards. There is a lot of detail, background and events that are told that matter and as such, and for the length of this work, attention should be held to the story throughout.

The writing has personality, character and it’s quite clear that the author cares very much to tell a story with heart and soul. I didn’t feel like anything was wasted in the storytelling, nor did I feel at the end of the work that the story was left hanging with many important things untold. There is a good sense of closure, of drawing this part of Cedric and Angeline’s to a point where the ending is a satisfying one.

The author also uses a very unique means of dropping the reader into the story that seems a bit odd at first and tends to make one ask “why is this happening” but when the last chapters appear and that in explained, I thought that was simply inspired storytelling. The questions were answered, the meaning is there, and that made the story much stronger.

It’s very rare that I do rate works as highly as I do this one. This is really an amazing work, one in which I felt very strongly connected with the characters and how the story was told. A truly amazing piece of prose in which anything is possible and sometimes anyone can do the impossible for the right reasons.

I’m giving this work a solid five out of five pitchforks.

A joy to read, a story well told, and most of all, the author’s own words tell how strongly she needed to tell this story… And it’s amazing.

So the only question is… When will the next book appear?

I can hardly wait…

My thanks to Valerie for sharing her work with me, taking the time to as well write a bit about her work in the SuccuWiki, and most of all, creating something that brought a lot of joy for me… There are very few stories that, for me, tell a story that’s new, refreshingly so in this case, and I wish her the best in her writing career…