Succubi Image of the Week 355

It has been, as well I know, quite some time since I have created a Succubi manip… As it is Halloween, and it is my tradition to share a Halloween manip… I thought it was time for something… or rather someone… to be Drawn Upon… 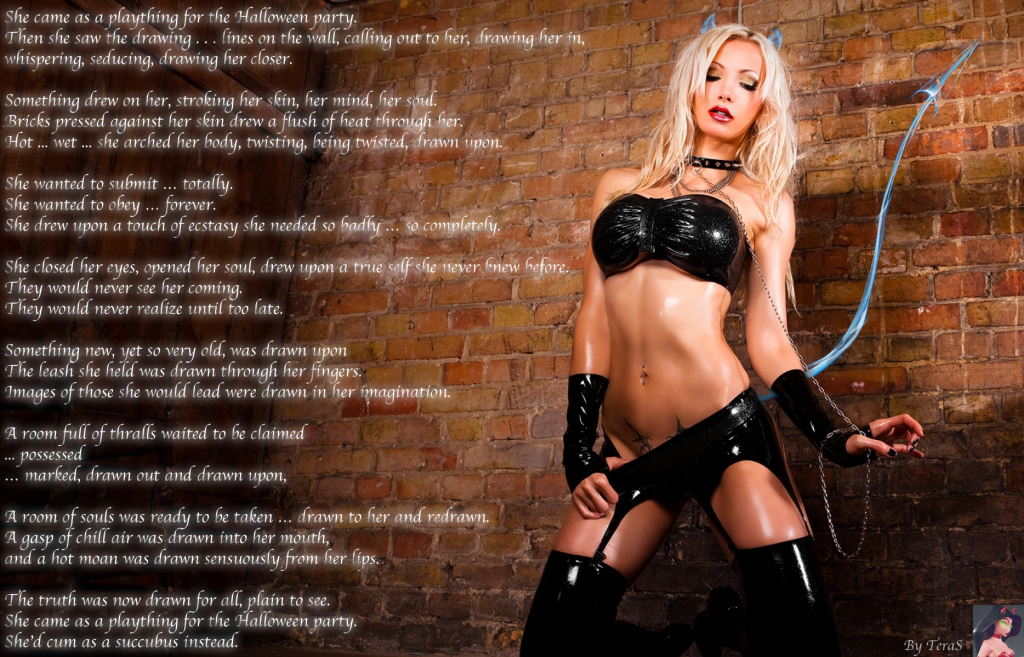 Drawn Upon by TeraS

And here, for those that would like to read, is the story that goes with this image:

She came as a plaything for the Halloween party.
Then she saw the drawing . . . lines on the wall, calling out to her, drawing her in,
whispering, seducing, drawing her closer.

Something drew on her, stroking her skin, her mind, her soul.
Bricks pressed against her skin drew a flush of heat through her.
Hot … wet … she arched her body, twisting, being twisted, drawn upon.

She wanted to submit … totally.
She wanted to obey … forever.
She drew upon a touch of ecstasy she needed so badly … so completely.

Something new, yet so very old, was drawn upon
The leash she held was drawn through her fingers.
Images of those she would lead were drawn in her imagination.

A room full of thralls waited to be claimed
… possessed
… marked, drawn out and drawn upon,

A room of souls was ready to be taken … drawn to her and redrawn.
A gasp of chill air was drawn into her mouth,
and a hot moan was drawn sensuously from her lips.

To all, a Happy Halloween from the Queen of the Succubi…