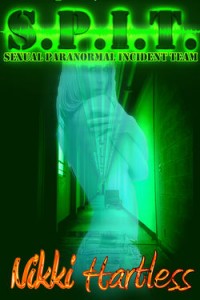 I wonder sometimes if it is too much to ask that writers have someone edit their stories before they publish them. I mean, you write something and then what makes you not have things checked? Is it because you wrote an erotica work? You don’t have anyone you could trust to read your work and edit? Maybe it’s the thought of just getting your story out so that you can make a little money on it?

Whatever the reason and why ever this happens, with the advent of self-publishing this is really starting to become a problem… Seriously.

Welcome to S.P.I.T. We are here to help.

Follow the paranormal investigative team as they head to a small New England farm, where the elderly Mr. Wilkes has been visited, and sexually pleased by a sexual spirit…a succubus.

But the team goes in and gets more than they bargained for as the succubus isn’t only satisfied with Mr. Wilkes and they embark on a sexual conquest to defeat the succubus.

The teams’ sexual limits will be tested under the succubus’ sexual energy and all barriers will be broken in this sexual tale that has no limits.

The barrier between the worlds will be shattered and nothing will ever feel the same.

The one thing about this work that gets to me the most is the total lack of an editor taking a look at it. There are tense errors, word errors, mispunctuation, character confusion, loss of plot threads… The list goes on and on. Yes this is a 99 cent book but seriously? Time couldn’t be taken to fix at least the tense of the story shifting back and forward?

Setting that aside, and for me that’s a real struggle, the next thing is how things are so jumbled up in the story. There’s a love interest problem at home for one character, another is trying to keep the succubus with him but get rid of other spirits around him. The succubus herself isn’t anything special really and to be honest I just didn’t care one way or the other about her.

See, the point of this story is a series of sex scenes that are written like the author was in the room with the characters and trying to write out what was going on and the dialog at the same time. All it needed was a Twitter feed and that would have just been perfect…. not.

One sample passage, just to show how jumbled up things are when reading this work:

She pouted but she knew how important it was, she didn’t want him to leave but she had too it was his passion she loved him so she respected Jake’s wishes. That night Jake slept like a baby holding Carle’s tit as she snuggled up close to him taking care of her man, for a split second she felt concerned for Jake it was fear something was going to happen she blew it off and drifted off to sleep. The morning came and the sun shot through the blinds and hit Jake right Square in the eyes, it felt warm on his face he moved side to side as his hand felt the soft supple tit of Carle moaned softly from his touch time to go to work Jake was saying to himself there was a man that needs his help.

Isn’t Carly spelt normally with a ‘y’? The writing is just so awkward, it looks so wrong and honest I felt my thoughts stopping and starting with each line of the story trying to figure out what the author was trying to write. It doesn’t take a lot to fix the words to make them sound better does it?

If the point of this work is really that it is a stroke story, I can’t even call this a lukewarm flash. It’s not hot, it’s not anything close to hot. The heat in it gets squashed by the writing itself because I think the author was either unable to get their thoughts out on the keyboard or worse, they were in such a rush to that it came out in a stream of consciousness. But that didn’t work here and I don’t think it ever does really…

I didn’t enjoy this and I cannot recommend it at all, succubus in the work or not, it just isn’t worth it. If the author could have it edited, work on the characters some, add some real motivation, some better scenes and a lot less testosterone and focus on oral sex… There could be a better and more involved story here…

We’ll never see that I expect however.

This work only gets one pitchfork out of five.

Too many mistakes in the writing, it felt like a train wreck and I don’t like train wrecks.