Succubi Image of the Week 353

A Review of The Succubus’ Sub – Session Eleven: Masquerade by John Dylena 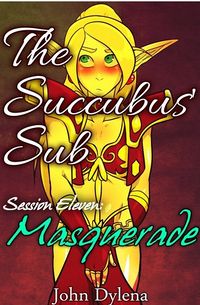 Sometimes we are offered something that we have always wanted. When that moment comes, the questions really begin. What you thought was sure in your thoughts becomes something you need to think about… to experience… to discover within one’s self. It becomes a struggle between what you have and what you desired before.

But then sometimes what you see is only an illusion. Sometimes that illusion is pressed onto us, sometimes others do that for us. The hardest thing to remember is that even in illusions there is a grain of truth. The real challenge comes in knowing what that is and how to find it when you need it…

One morning Brett doesn’t respond to Myserra’s calls. She finds him with his head buried in his computer and moments later he has a surprise for her: two tickets to the biggest comic book convention in the country.

Only things don’t go according to plan when Brett finds himself in cosplay and not Myserra and while dressed and walking around the convention he meets a woman named Ashley who is very interested in him.

Brett has a surprise for Myserra, and she gives into his request to visit a comic book convention. But with that comes the promise that Brett will pay for his not coming when she called for him and he was “busy”. Brett discovers that the payment will be cosplaying a certain Blood Elf he knows very well while Myserra watches the fun and games unfold. As they do, Brett meets Ashley, the geek girl of his dreams. When the truth comes out, Brett finds that things are getting hotter for him…

One of the things that I enjoyed about this story was the transformation Brett goes through. It isn’t an overbearing magical one, but rather it’s a really nice reflection of what cosplaying is like, what the experience is like, and what happens when you do so. Myserra helps in making things happen, but it’s Brett that gathers himself into being who he appears to be and while that is both uncomfortable and amazing for him, it also allows for Brett to experience something that he never did before. Becoming the centre of attention and in that experience I thought that Brett managed to overcome some of his own fears, but also wrap himself in some of his unspoken desires. Myserra has always been very good at that and this story is no exception to that.

There is a light touch of erotica in the story and it’s just the right amount as not to overcome the overall story but to add to it. There’s a wonderfully hot moment between Brett in cosplay and Myserra when they are alone again that just made me smile as it spoke very well to their relationship and more. As well, towards the end of the work, when Ashley and Brett meet, with Myserra’s blessing, there’s some lovely teasing and playfulness that I thought worked well.

Myserra, for the most part, doesn’t appear as her Succubus-self for long in the story and in truth I think that worked really well. The story was more about Brett’s experiences and as such Myserra needed to be there in the background a bit. She isn’t invisible, not by any means, but she does guide Brett at the right moments and in ways that again show a lovely understanding of a D/s relationship.

Then comes Ashley, and for those that would like to know some of her background, I suggest you read My Succubus Ex-Girlfriend to learn more about her. As much as I like Ashley, and do read that work to see what I mean, there’s a shift in her between that work and this one that I didn’t quite understand at first. By that I mean that her personality… shifts… as the story progresses and for a time in the story it felt a bit odd. At first Ashley acts quite dominant and like Myserra teases Brett, but when she is taken to task, that bravado melts a bit. But with that comes a very interesting reveal, one that I didn’t expect. It’s one that explains a lot about Ashley but it also serves to turn Myserra and Brett’s life in another direction. It also brings into question an earlier reveal about Heather and that one is a mystery that I kept wondering about throughout the story.

With Ashley’s appearance, Myserra and Brett seem to have found something new. A challenge for them both in many ways I think and I do look forward to seeing where that goes. At the same time, there are a couple of questions that are left open that are really important and ones that I think will be driving the story forwards from here.

Wonderful writing, Myserra and Brett are characters that are written with passion, love and understanding. The story told of each learning something they didn’t know about the other and in that comes, I feel, something more for them both in the future. They will be living in interesting times and I do look forwards to see what they encounter next.

I do feel that the shift in Myserra and Brett’s lives at the beginning of the story might have been told a bit more, that part of the work seemed to be a bit rushed and I think that perhaps a little more exposition is needed. But that really is my one concern with the story as a whole and as such it is a minor thing which I think will come back to the story of Myserra and Brett again sometime. Unanswered questions do have a tendency to do that you know…

More than anything this work gave a glimpse into Brett’s own wants and needs in many ways, but it also showed that Myserra knows well that sometimes pushing, teasing, and even dragging Brett by the horns isn’t always what needs to be done. Sometimes you have to just let go and trust. It’s not the easiest of things to do, but it can make things happen that you never expected.

Their world is changing, but there is a mystery as well and it is one that I think will turn into something more than I think it will. I expect it will. Along with that comes a bit of trouble for Brett and where that leads is anyone’s guess…