Succubi Image of the Week 352

A Review of Two Boys and the Cocktail Succubus by B. Addler 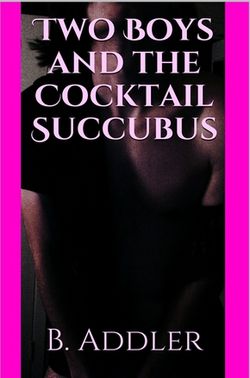 Two Boys and the Cocktail Succubus by B. Addler

Succubi are supposed to be, in a way, the gateway towards sexual knowledge. By that I mean that they can look into the desires of others and in doing so… they know. They see what someone desires and what they need most of all, whatever that may well be.

Tam is a virgin. When he meets a girl in town, things get strange. She’s mean, angry, and definitely a fag hag succubus with a tail that strikingly resembles a cock. There’s a whole lot of gay sex, a portal to Hell, and a whole lot of fun.

Tam meets a girl who turns out to be a Succubus named Jutah and she draws him into her world and her powers. Through her influence, he finds that what he thought he wanted isn’t exactly what he thought and in the end discovers that one truth exists not just on the Earth, but elsewhere too.

Jutah is a bit odd as far as Succubi are… The title of the story should give one clue to why that is. She has a personality that shifts from playful to dominant to controlling to aloof in a moment. It’s somewhat difficult to tell at times what she is thinking or wanting from Tam or for that matter from Bryon, the other boy that appears in the work after Tam and Jutah return to her home.

Long before the climax of the story, the answer is obvious and when the end of the story arrives it makes a good deal of sense in the story, closes the tale nicely, and is a satisfying conclusion to the work.

The writing is somewhat simple at times, though most of that is the characters themselves, what their understanding of themselves is, and what the moment they are experiencing is. Some of the scenes did trouble me, mostly for the pain the characters suffer through at times. I do not care for such things in stories, but it is very prevalent here. It is however how Jutah is, being part of her and what she enjoys.

While this is a complete story, I did have some questions at the end of the work that were not answered. It is entirely possible to continue this story with Jutah or the boys and see where that takes the characters and I think that would be interesting in itself.

However, I wouldn’t like to see all of the suffering continue…

The story was fine, the characters were good, but the suffering just made the work hard for me to read…