It’s really not all that much is it?

A Review of A Spot of Bother: Four Macabre Tales by Chris Woodyard 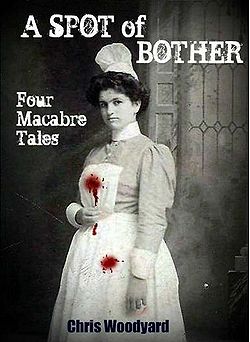 A Spot of Bother: Four Macabre Tales by Chris Woodyard

The world of the Victorian age I find interesting in many respects. Possibly the one time, at least for Succubi, where things were… difficult for them. In that thought can be created some interesting themes and concepts of Succubi. Some of those are, of course, the usual… But sometimes they are the unusual and then the work is very special by far.

What if the age, its restrictions on those that live within it, brings a need for the Succubi that makes them angels of mercy within the tales of untruths of the age?

It’s a concept that I think has possibilities…

For fans of P.G. Wodehouse, Saki, and Downton Abbey, four neo-Edwardian tales to chill and amuse.

Property of a Lady: A mild-mannered collector of smut buys a piece of rare erotica, only to find his morning tea brought in by a succubus determined to reclaim her property.

Stitches: A ghostly seamstress returns to instruct a Victorian dressmaker’s drudge in the finer points of needlework–at a fearful cost.

A Spot of Bother: When a shocking death occurs in the library of a stately home, redoubtable housekeeper Mrs. Daffodil is there to tidy away the family skeletons. Whether procuring a girl and her dog for the young master, blackmailing a larcenous butler, or arranging a murder or two, Mrs. Daffodil always does her duty.

There is one story in this work, Property of a Lady, which has a Succubus them in it and that is what I will be focusing on here.

Mr. Simms attends an auction of some trinkets. One catches his eye, a ring but for only a moment. At least until a woman arrives and begins to bid on the ring. He finds himself also bidding for it and wins it for himself. And then over time the true power of the ring is revealed and with it a secret about legends as well that changes two lives… forever…

The story is, quite simply, brilliant. Mr. Simms is a complex personality with wants and needs surrounded by a time, place, and relationships that all scheme against his happiness. When he comes into possession of the ring he does not simply change from who he is. That in itself is important for the story as a whole and in truth it makes the connection between himself and the Succubus of the story all the more touching and loving when it arrives.

Miss Maltravers is the Succubus of the story and she is not, in the slightest, stereotypical in nature. She has no horns, tail, or wings, but none of that is as important as what she represents in this time as a representative of her kind. She is one of the Succubi, but in that expression of who she is comes truths that really are striking. She speaks of their kind coming to the need of those that look for, as she puts it, relief. To comfort them for that is their calling. It is tragic when she describes centuries of being called to the owner of the ring and then, after a moments passion, being rejected. To slowly fade into nothingness until the circle begins again.

Mr. Simms changes that completely. The path to the moment, that change in their lives which makes their own existence so much more is heartfelt, powerful and passes over themes that resonate in my own thoughts very strongly. The world around them, specifically Mr. Simms’ family, remain as they were which is a sad thing really, but the couple are stronger and better together.

The story arc is wonderful, passing through moments that feel right in all ways I can think of. When the close of the story comes it is perfect for them in what it represents and gives in both hope and the truths of the time. Perhaps one cannot change the world, but one can be true to one’s self and the one that they love.

That story is one that is true in any age.

After the brilliance of the first story in the collection the following two are not quite as good or enthralling to me. That’s not to say that they are not good works, for they are. It is just that the themes do not interest me as much and the first work remained in my thoughts over top of the rest of the collection. If the first work was thoughtful and unique, which it was, the balance was not quite so much so…

Really quite brilliant prose, the settings, the dialogue both set the right tone and felt right for the time the stories are set. The first piece is, for me at least, the most thought provoking and really well enjoyed by far. The balance of the collection is as good, but not quite as riveting for my tastes at least…

That first work I will remember for a very long time…