A Review of Hunting for Possibilities by Emma Greer 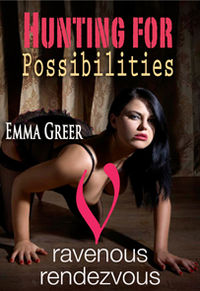 Hunting for Possibilities by Emma Greer

There has to be an emotional connection between the reader and the characters in the story for one thing. That connect can’t be vague or a wisp of a thought either. It has to make the reader want to see what happens next and where the story goes. Then comes the story isn’t. It should never be a massive information dump that the reader has to slog through before actually getting to the meat of the story. Purpose and reason are important and mixing that with background does matter.

Managing to balance both of those needs and do that well? That’s a talent. I found an author that certainly has that going for them…

Always hunting for her next fix, Ti spends her life feeding off the sexual energy of humanity, and nothing gives her a better fix than sex. Although she’s sampled many different types of men, one type has always eluded her – the one who would be able to stay. While out hunting one night, her world is turned upside down when a sexy stranger provides her the feast of her life and the possibility of something more…

Escape to a world of danger and pleasure with this sizzling tale of succubus love and lust!

Ti is a Succubus, or at least she accepts that she can be described as one. However, she is quite a bit different from the stereotypical Succubus in many ways. For one thing she feeds on emotions, strong sexual ones being the most beneficial for her. The other is that when she feeds her normally porcelain white skin glows and shimmers with that power she is feeding on. I found that actually one of the most unique concepts that I have read and it hooked me into the story.

While the what of Ti is interesting, the who of her is somewhat less so. By that I mean that she is focused on sex alone to the exclusion of just about everything else really and that, for me at least, is not so interesting.

What’s missing here is the promise of some substance about Ti. It’s obvious that she is a creature of sex and loves it in all of its forms, the story is very clear on that point most of all. But Succubus does not live by sex alone and in this case I think that Ti would be more as a character if that was part and parcel of the story.

Much too short in so many ways not the least of which is the explanation given by Ti of what she is and how her powers are manifested. It also is a shame that the story was never continued further as it really seemed like that author intended to by how it ended.