A Review of Succubus by Grant James Turner

A Review of Hunting for Possibilities by Emma Greer 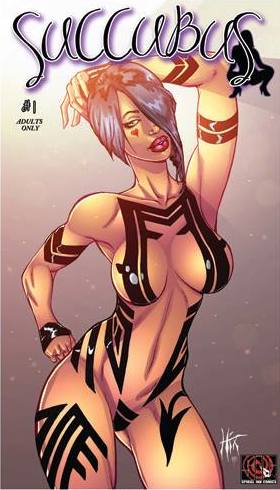 Two things about the sample artwork struck me: First, that the main character did not at all seem like the usual stereotypical Succubus that most comic books have in them. The other was that there was something about her tattoos that added something to her… something about the one tattoo that looked like a tail…

The series, based on the artwork, was going to be quite adult in nature, had a style for the main character that appeared to be very unique, certainly one that I had not seen before as a depiction of Succubi, and I was curious to learn more about the character, named Ximena, her world, and more importantly to me, what sort of Succubus she was.

According to what information I could find about the comic book, the series is created and drawn by Rob Hicks and the premiere issue was scheduled for release on September 26th.

The series is planned to be bi-monthly and will follow the story of Ximena, the main character of the series, who you can see on the Issue #1 cover here.

Ximena, possibly one of the most striking Succubi characters that has appeared in comic books for some time is described as being:

A real live flesh and blood Succubus that needs to consume sexual energy and fluids the same way normal people need food and water! By day, she works as a very popular and high paid webcam model. By night, she maintains million dollar rock star status at a small stripclub called “The Velvet Teacup!”

I thought the premise of the series was interesting and I found the artwork quite striking as I have mentioned. As such I placed an order for both a digital and print copy of Issue #1, the digital copy I have received, and at the time of this post on the Tale I am awaiting the print copy’s arrival. I am going to share my thoughts about the first issue, what I hope might happen in the future, and, of course, where you place an order, should you wish to.

For those that like adult comic books, I think you should.

The first issue is twenty pages in length which includes the cover of the issue along with an combination introduction and imprint page and a series of one-off images of Ximena in various poses after the issue itself.

The series begins with Ximena at the strip club she performs in and then follows her through her time there and various encounters with others that tell not just of her need for sex, but also gives hints to how her Succubus powers work. Perhaps the most interesting part of that, for me at least, are her tattoos and especially the one of a tail which has the ability to move over her body in different ways. It’s a somewhat subtle way of showing that she is a Succubus without having to just show her having horns and a tail out in the open. While the overall theme and plot centres around Ximena being a Succubus, there are some touches of mind control here and there as she is intimate with others.

Beyond the adult nature of the plot, there is an appearance of a character at the end of story which leads into the next issue, setting things up plot-wise. There are a lot of questions left of course, really this issue wasn’t so much an origin story as it was getting the series off and running with a bang. There’s the question of what does Ximena actually look like? Does she nave a tail and horns? Her mother is mentioned in passing, but not her name or anything else. She would have to be a Succubus as well and as such I wonder what her name is and what she looks like too.

I would have liked a bit less sex scenes and a little more Succubus in this issue. That’s mainly because I feel a bit more plot would have added to the story. I do understand that the series is an adult one and as such readers are expecting to see a Succubus being in control, which Ximena is, having sex as much as she can, which Ximena does and overall seeing a Succubus “at work” as it were.

From that perspective, the issue delivers on that promise. Going forwards there needs to somewhat of a payoff in the last page of the issue, which sets up a lot of questions. We’ve seen Ximena, at least one part of her. There’s more to be told about her other than her insatiable sexual appetite. I’m hoping to see that in the next issue and going forwards.

The art is very striking, very detailed, and I like the personality that the artist put into Ximena and the supporting cast. The cover I think is really the single image I like the best, especially the “Black Tape” vibe that covers her form. To be honest, I’d like to see Ximena wearing something like that in the series and considering her tail I think that would be neat. Especially if the black tape shifts around like her tail does. Perhaps tied into her emotions as well? It’s something to ponder over…

I’ll give the premiere issue of Succubus four out of five pitchforks.

I like Ximena, I like her quite a lot and I will be following this series quite closely as while the initial issue had a very “porn movie” feel to it, the hints about Ximena, her powers, her attitude and desires, I think will make for a very good and telling character and series going forwards. As I understand things, there is a lot of story to be told in the coming issues, for which I am very happy about, and with that I believe will come a story about a Succubus that will be not just sexy, but seductive, telling, and in its own way, quite powerful.

You can find the publisher’s listing of their comics, including Succubus at Spiral Ink Comics here.

The next issue of Succubus is tentatively scheduled for Late December 2014 or early January 2015 and I am really looking forwards to see what happens next!

I would like to thank Rob Hicks for answering some of my questions about the series and Ximena herself, as well as providing the artwork used here. Please do visit Spiral Ink Comics and check out their many ongoing series!