Succubi Image of the Week 350

A Review of Madnight Seduction by Fiona Winston 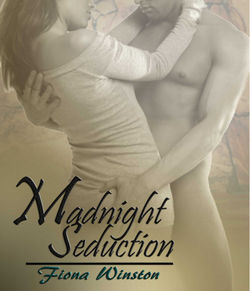 A love story needs one important thing. It isn’t the sex, it isn’t the setting or the characters. What it needs is love in the story, true love, heartfelt love. That does not always happen in many stories, but when it does, then it makes for something special.

It’s an interesting concept if you think about it…

When Chloe goes out with her friend, she never expects to be waylaid by the fiercely sexy James–or his heavy draw on her witchy-powers.

James runs his club, sipping happily at all the sexual energy he captures every night, but when Chloe shows-up, his whole world turns upside down.

They’d do anything to stay together–she rescue him and potentially expose herself to re-capture by the manipulative Queen Titania; he, return to his mother’s side to rescue his wayward love…

Chloe is Fey and has escaped from the Queen to live among humanity because she is slated to marry the Queen’s son. One night she goes to a bar and finds herself attracted to someone there that is more than he seems to be. His name is James, and he is an Incubus… and he finds himself attracted to her completely and she in return.

James is not the stereotypical Incubus by any means.  While he has no tail or horns, he does have all of the powers of an Incubus, but the thing is that he isn’t evil or nasty or poor in nature. He has a heart and Chloe captures it from the moment they met. His personality is intriguing in that there is a mystery about him from the beginning that is important and I wondered about throughout until the end of the story when it was revealed and brought the tale to a perfectly delicious conclusion.

Chloe has her moments of being somewhat self centred, but that brings about a change in her through meeting James and what happens between them that, finally, gives her strength when she needs it the most.

The erotica is sensual, soft and wonderfully delicious.  It is not the point of the story, which in the grand scheme of things means that it adds to the story and does not retract from it. The work is not a hot flash piece of erotica, it is more of a tale of fantasy with a bit of erotica to spice the growing relationship between James and Chloe.

I really cannot say that there is anything about the work that retracted from it. I will wish that there would have been more about the Queen, Chloe’s family, and a bit more about James’ friends in the story. This is all really minor, I would just have liked to know more about all of them than is revealed.

Beyond that, I would have loved to see a second story in this universe in which Succubi appear. There are none to be seen in this work, but they are hinted at existing and it would have been nice to see. Still, James is a lovely Incubus and I’m quite happy to have seen him here.

Romance, story, love and heart with a dash of heat. Almost perfect and in that I was quite pleased…