I really want to like this Dark Fantasy Costume… Really…

A Review of Their Forbidden Desire by Angela Fattig 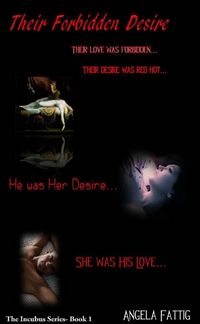 Their Forbidden Desire by Angela Fattig

A review of a new series about Succubi and Incubi today on the Tale. The series is called Incubi, but in truth I think it would have been more apt to call it belief.

One of the things that means more than life itself to some beings is the hope they hold within them to be able to find love. But to be told that you cannot love, and having that hope means that you are banished, set adrift, and then saddled with a curse that follows you and beats at your thoughts, spirit and soul is a terrible thing.

But belief in love, that one thing that can make you complete, can give you the strength to face your fears and the threat of the powers that seek to stop you.

Reality is a harsh friend, even for an Incubus. Nate Sanders, a turned Incubus, finds that his life is shit. He was sent to Earth, many centuries ago, to seduce women in the hopes of filling the world with enough half-breeds to take it over. Nate, after several years, decided enough was enough. Humans, once you got to know them, weren’t that bad. Life for him has grown cold and lonely.

Reality is even harsher for a Human. Melody Andrews is a shy and lonely twenty-seven year old. Her family is falling apart, her friends have deserted her, and she is running scared. She had always dreamed of a life she knew could never be. She has seen him, the unknown man, many times on the street. She had fantasized about him, craved his touch. She was too damn shy to say anything. Life for her had grown cold and lonely.

Fate brings Melody and her stranger together, but will the ones who rule the Incubus’s world tear them apart? Will Nate be in time to save the woman he loves?

Hell on Earth will become a reality.

Nate is an Incubus banished to Earth who seeks one true thing in his life. Someone to love. Melody is a lost soul who sees him everyday walking by and wishes that he would say hello. One day Nate makes the choice to do that and… things change for them both.

There is one specific point in this story that, for me, just captured my thoughts and it comes down to a simple point that is said many times. Love can not be denied. It is the providence of the being that created it and none can get in its way… no matter how hard they may try.

In that point comes the core of this story. It tells of Nate facing the odds against him, a prophecy that has begun because of him, and the promise that all Incubi and Succubi have from his decision to take a chance. Along with all of that comes a more personal, human story in what Melody has faced in her life, all that has been stacked against her, and the one belief she has held for so very long that Nate gives to her.

In that story comes something that to me, personally, was both heartbreaking and deeply touching. How Melody and Nate find each other, the doubts that swirl within them, and what happens when Nate reveals himself, his true self, and then the one thing in each of their lives that connects them together is so very fitting and speaks in the right tone and voice for these characters.

Nate being an incubus does reflect on the traditional myths to an extent, but in spite of where that could have taken the story the author gives a new, better myth and purpose to the Incubi that I thought made a lot of sense and allowed for so much more character development to occur. There are several Incubi that appear, some of which are “good”, some that are not, but each has their own personality and focus which was good to see.

There is but one Succubus that appears in the story, her name is Lindsey, but she is seen only fleetingly in this work. A preview of the next work in the series seems to make it clear that she will be of the focus there and I do look forward to seeing that as from the little seen of her… she’s interesting. That is always a good thing to see in a character after all.

Nate, Melody and their friends have to confront a force that wants to keep them under control, unhappy, and afraid. The thing is that after a while such things have little effect on those that have to deal with such things. And when you have a reason to rebel against such a thing… The world can change and this work shows the beginnings of that happening.

Being that this is the first work in the series, there is a good deal of world building, the establishment of the characters and what they strive for. It also shows a bit of what the Incubi actually look like and what their human forms mean which I thought was unique and something I hadn’t really seen before.

There are a few minor spelling mistakes that made it though the editing process, and there are a few points where the dialog just didn’t sound right. I know that this work was also released in German and I wonder if that has something to do with how things are put and said. It’s little things, colloquial language mainly, that isn’t used in quite the right way that tripped me up from time to time. I do read German, and when I read that version of this work, I could piece together the inflections of the characters a bit better as a whole. The emotional intent of some of the conversations just worked better in German than English.

That said, the story, at its core, is quite well done. It stands up very well through the trials and tribulations of Melody, Nate and the others in their life. The emotions are very real, the relationships, hopes and desires stand out exceptionally well and I do look forward to seeing the next work in this series.

A solid start to a unique take on Succubi and Incubi that I enjoyed. An interesting universe with much promise and story to tell which is always a good thing.