Succubi Image of the Week 349

A Review of Post Secondary Succubus: On the Inside by Lacey Layton 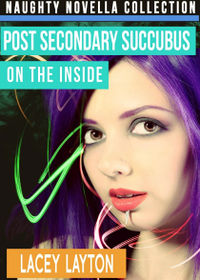 Post Secondary Succubus: On the Inside by Lacey Layton

A review today on the Tale of the second work in a series that I had some high hopes for. You can find the first review of this series here on the Tale. At the time of the first review I said that I thought that the main character Kaylee was quite interesting as a Succubus and that I hoped that if there was another work that would continue. Sadly, I really can’t say that that hope was fulfilled in the second work in the series.

My disappointment comes in how much Kaylee’s personality changes from one work to the next, for one, and as well I have a problem with a Domme that doesn’t treat their submissives correctly. That’s a real problem for me to enjoy a story and, I regret, in this case I found that I didn’t…

It’s been a year since Kaylee accepted her role as a Succubus, as a woman who can drive men to their knees. She plays on the edge of darkness and pleasure learning about her control while feeling unfulfilled in her current situation.

But there’s another out there. Hunting and killing with the same power. It brings Detective Bryan Storm into her life. A determined and intense man that Kaylee finds herself drawn to. But both of them harbor secrets that keep them from getting too close. Until someone close is taken from Kaylee.

Kaylee, one year after she has come to terms with being a Succubus. Mike is still with her, but after making a mistake in judgement, Kaylee finds herself on the trail of another Succubus that is the worst of them all. And in doing so, Kaylee finds some dark things within herself.

In the previous work, Kaylee encountered someone called Gavin who “taught” her what it meant to be a Succubus. The sad thing is in spite of how the first work closed, it seems like Kaylee really didn’t learn much about herself. In this story she’s very much like Gavin in a lot of ways. Sadder still that she uses her power in ways that are rather brutally controlling Mike at times. That is one problem I have with Kaylee. She saw the worst she could be and then she doesn’t seem to have learned much from that. It’s quite clear that she is Mike’s Domme, and he is her submissive. But in spite of knowing that she makes a choice that no Domme would make.

The result of that choice is terrible and sends Kaylee headlong into a search for the succubus that ended Mike’s life. Her name is Deidra, and while she is a Succubus, and has a great deal of power, Deidra is stereotypically evil, almost to the point that I expected her to laugh ominously at times as the story went on. If I didn’t care for Kaylee, Deidra was simply into the realm of being cartoonish. I don’t enjoy characters that seem to be evil for the sake of being so and it felt like Deidra was. Whether that is because of her personality, or some sort of madness, or lust for power is hard to say because that doesn’t come up in the story. What does is a series of interludes in which Deidra appears, causes things to happen, and then vanishes into the darkness before popping up again.

There is a point in the story where Deidra claims that one succubus cannot effect another. Yet she does use her powers on Kaylee. This bothered me a lot as if a claim is made in the context of a story, you cannot simply “get around” it by a hand wave and quickly moving on with the story. The reverse happens as well, though the explanation by Kaylee makes a bit more sense so I can accept it… to a point.

The story has a very heavy D/s theme, with a lot of BDSM added at the beginning of the story. There’s a good amount of mind control which runs hot and cold at times as well. The erotica is a series of hot flashes that, for me, did not do much, but then I don’t believe in harming a submissive. I know that some enjoy that,  but I don’t and as such I found it hard to take at times. Call it my own personal experiences if you will, but overall the D/s theme didn’t quite ring true for me and that took me out of the story at times as I tried deal with the scenes. The succubus mind control scenes were very hot and I liked them as a whole when the story used that plot in a more seductive way rather than an abusive one. Again, my preference.

The thing that I had the most problem with was the ending where it seemed like Kaylee didn’t learn anything from her experiences, the loss of Mike, nor how Bryan sees and relates to her. She says one thing and then does something completely different, which while was more of fulfilling a fantasy than anything else, seemed also as if she was falling into the trap that both Deidra in this work and Gavin in the first, had. Promises and intents are one thing, but losing your ability to know right from wrong is something quite a lot more worrisome.

If another work in the series appears, I would like to see Kaylee get hold of herself and turn back towards the person she really is and not the caricature that she seems to have become. I think that would make for a better story considering where this work closed and what could happen next.

The changes in Kayless’s personality were jarring and surprising which made enjoying the rest of the work difficult. Being a Domme is more than control, more than ordering another to obey. Forgetting that leaves the balance flatter than it should have been.