Succubi Image of the Week 348

A Review of Sex with a Succubus by Olivia Birch 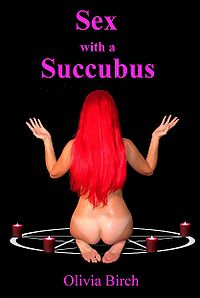 Sex with a Succubus by Olivia Birch

Most of the time any story that has a Succubus or Incubus in it will go the route of them being horrific in some way. How much so depends on the author themselves in how that think such beings should act. Most of the time the actual horror is overt and strikingly so. The problem appears when the story is all about the horror and not a lot else until it is far too late…

With only hours left until daybreak, the beautiful but quick to anger succubus Meridiana must hurry if she is to make her boss’s deadline. Unfortunately for Meridiana, when it comes to collect her last specimen for the night, she comes to find out that she may have chosen a man too much for her to handle.

There are a few things wrong with the book summary for this work I think. One is that the actual part of the story that is told about is at the end of this work. For the most part the story is of Meridiana doing some horrific things. She is violent, what she does is truly horrific and really amounts to nothing more than a somewhat stereotypical view of a being of horror doing some horror for the shock of horror.

Past that there really isn’t anything about Meridiana that I care about, want to see more about or understand. She’s not seductive, not at all. She’s nothing more that a monster and a crudely acting one at that. The story is more focused on the abuses she acts upon others, the imagery of what she does to them and nothing else of substance.

Even when she isn’t doing evil there isn’t much in the way of explaining way she does what she does, for who or why she has to. There are many incomplete threads in the story that are literally mentioned in one sentence and then the story moves on to the next bit of horror to describe.

The writing is somewhat crass in nature both in speaking of whatever sex is happening and the thoughts of those involved. There isn’t any kind of character or personality save for the sex and the horror. That’s something that doesn’t make me want to continue to read, but as this is only seven pages, I at least managed to do so.

The ending is not satisfying, it lead towards what one would assume would be a second story, but that I haven’t seen published as of the time of this review. I cannot say that  would read the next work in the series from what I read in this one.

I just haven’t the desire or interest to find out what happens to Meridiana next.

Really did not enjoy this story at all. The ending wasn’t a bad idea, but it didn’t amount to anything save wanting the reader to buy the next book. The problem is that there isn’t one.