The description does not match the costume…

A Review of Banshee Charmer by Tiffany Allee 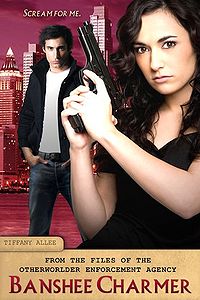 I do like detective stories, but one of the things that I have to have is a strong main character. If that isn’t there then, for me, the story falls apart quickly. Now, having a lead that’s a bit on the tough side and then having her to deal with a series of murders that hit very close to home… That’s a real page turner.

Add to that a universe where Succubi and Incubi exist and that’s something that will keep my attention from beginning to end.

When she’s sent to a crime scene and finds her second dead woman in as many weeks, half-banshee detective Kiera “Mac” McLoughlin is convinced a serial killer is on the loose. Incubi are extinct, her boss insists. But what else can kill a woman in the throes of pleasure? When her partner is murdered after using witchcraft to locate the killer and Mac is thrown off the case, her frustration turns to desperation.

Certain the killer is an incubus, Mac works behind her department’s back to chase down slim, sometimes perilous leads. While the killer eludes her, she does discover handsome Aidan Byrne, an investigative counterpart from the enigmatic Otherworld Enforcement Agency. Mac typically runs her investigations fast and hard, but with Aidan at her side, she’s running this one “hot” as well. But Aiden knows more than he’s letting on—something that could shatter their blazing romance and add Mac to the killer’s growing body count…

Mac, and no one calls her Kiera, has a problem. She’s called into a murder case that is… odd. Then things get odder when the suspects are narrowed down to being either a Succubus or an Incubus. Now all she has to do is manage to keep her head on straight, not get killed, and solve the case… All the while a mysterious man adds to the fun and games… in more than one way.

Keira really is one of the best detective characters that I’ve read in some time. She smart, tough, and very strong willed. More than anything through the course of the story I liked seeing how she thought and put the pieces together about what was really going on around her. When she suffers a loss, and honestly it’s a huge one, she doesn’t fall apart like some stereotypical heroine and go running away from danger. She faces it head-on. This of course makes things more complicated and dangerous for her. but then she’s not exactly all human.

There’s actually a lot of background mixed into this work, but it isn’t an info dump which I appreciated. I liked that Keira had a history, a well thought out one, that matched who is she, why she is, and where she is. That’s important and I’m glad the author did this.

Aiden is… a mystery. Now, when Keira asks what kind of supernatural he is, his answer of “sex god” told me that he was an Incubus, which in this universe are supposedly extinct. As a whole the tease of what Aiden is really wasn’t hidden all that well for me at least and even if I didn’t have so much of a focus on Succubi and Incubi I think that it’s clearly obvious what the killer is, but not who.

That question does tear at Keira as the story unfolds and in the end it’s a lack of communication that makes the story go in the direction it does. That does add to a sense of danger and it really does work well as a whole… But I wonder if not coming out with the truth a little sooner might not have been better.

There are Succubi in this work, two of them and that was really a bit of a revelation for me in several ways. The main one being that in this universe Succubi do not kill those they are intimate with. I liked that one Succubus said that they need to eat just like a normal human being. That for me really spoke well of them as a whole. The one Succubus detective herself had the right “look” and personality, but in private she was a lot more and that I really did enjoy.

As for the Incubi, they are described as being not seen for centuries, which I thought was interesting considering that the Succubi seemed to be well blended into society overall. Further, the idea that when they find a match for themselves they take a small part of them into themselves and thus become connected intimately with them was a twist that means a lot in this work as well.

The work has a very film noir feel to it, you can imagine the look of the city, the people that live in it very clearly. Every one of the characters has a lovely voice to them that stands out very well I thought. There isn’t much in the way of erotica in this work, really only two scenes. But they are central to the story as a whole and they aren’t just tossed into the work without a thought. They matter to the main characters and worked well I thought. A tight plot, well told and with purpose. All in all a really good page turned of a mystery.

The only thing that didn’t quite work for me was the number of red herrings that cropped up the work. They are there to push the story along I realize, but, I’m not sure that they were needed all that much. Taking them out of the story didn’t hurt it at all and in that why they are there is questionable. The core story itself was more than enough to hold my interest, it wasn’t necessary to divert attention away from that overall for how strong it was.

I’ll be reviewing the second work in this series Succubus Lost next Tuesday and I’m hoping for the same wonderful tale being told as it was in this work. I do need to add one final comment, and this is about the cover. The cover I am using in this review is the original one when the work first came out. It’s been replaced, as has the rest of the books in this series, by new covers. To me, the old cover had more of a detective story feel to it than the new cover does. But I suppose that flash sells and the new cover has that. But it does turn me off nonetheless.