This costume is a real Sin honestly…

A Review of The Warder’s Demon by Viola Grace 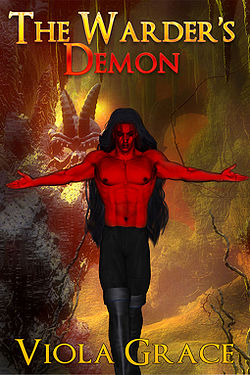 The Warder’s Demon by Viola Grace

The story of characters should not be, by any means, just their recent past. They should not make mention of family that are never seen or things which are touched upon but have no bearing upon the story itself.

The tapestry of the story is the history of the world they live in, what they do, and, if at all possible, the changes that happen in them and around them as the story unfolds. And if that includes a wonderful love story that’s just fine with me…

Elhara Warder has spent her life surrounded by the warmth of friends and family. Meeting a demon by chance at her local bar surprises her, but when he takes her on the most romantic dates of her life she feels herself falling for his considerable charms.

Solar has lived his considerable life span waiting for a woman whose sexual fantasies would not cause his body to shift into her ideal man. When he meets Elhara Warder, his glamour is stripped and she sees him as he is. To his shock, she does not run from his demonic features but rather speaks to him as if he was one of her own kind.

He wants to get to know her better and when she agrees to start meeting him during the daylight they start a relationship that surpasses any he has ever known.

The moment that they commit, a succubus takes action to destroy their happiness, but can Solar recapture what was lost when Elhara loses all memory of him, or will starting over do the trick?

Elhara is out on the town and meets someone… different. His name is Solar and he is an Incubus. The two find that they like, then over time, come to love each other. But then a Succubus named H’cheri does not want them to be wed and things take a turn for the worst.

Solar is the kind of Incubus that I personally enjoy reading about. He is intelligent, he has personality and most of all, he is willing to be more than he is expected to be. He does not feed on souls like the legends, he instead needs both love and lust to sustain him. It was much more interesting when the little touches of his personality came through in the story. His love of nature, the things he does with Elhara, such as minigolf just made me smile. Solar is, simply, a full person in the work and not a paper tiger.

H’cheri on the other hand, the single Succubus that appears, is quite stereotypical in her manners and actions by far. She is an important plot point and drives the work in a direction that it would not have gone without her. But she is not a real character to me. All that she is comes to the single thought of having Solar and not letting anyone else have him. It was a good thing to be honest when she was in the work for only a short time.

Being that this is the final work in the Warder’s series by this author there is a vast tapestry to draw from. Both Solar and Elhara’s families are complicated and vast in nature, but the moments shared between Solar and those that wish to be sure that he is right for Elhara tell of their love for their kindred. His own family, while slightly demonic yes, is not actually evil but instead lives on different sorts of energy which actually makes for some fascinating thoughts about them.

The story is made of moments shared. The ones between Solar and Elhara in the beginning are wonderful and when H’cheri interferes the anger and hurt within Solar is exactly how it should be. More so the battle he undertakes to find Elhara, to be with her, to reconnect… that is the stuff of dreams…

The author has a way to draw the reader into the story that lets you feel the emotions of the characters not just their actions. Beyond that, the descriptions of the places they are leaves quite an impression. The erotica is loving, as it should be between two found souls that desire each other. Some of the moments were hilarious and that took the edge off of some of the more serious ones. It is simply a joy to read…

It is a shame that this work was the final one in this series. As the closing chapter it ends the series on a perfect note, one that really was much more than I expected at the beginning. I would have liked H’cheri to be more than she was or to see other Succubi to have something to compare her with. There are of course as well some secrets about both Succubi and Incubi in this universe untold and I would have liked to know them as well…