A Review of Bound to Hell by Carl East 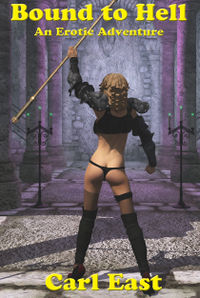 Bound to Hell by Carl East

I believe that having interesting characters is what drives a story forwards. Without that one thing any story cannot stand on it’s own. Having an adventure, no matter how interesting, no matter how action packed. cannot make up for that.

It is their voice that matters. They have to have personality. They have to be someone that I care about to know what happens next.

The thing is however, having characters that are interesting but cannot express themselves well? That’s where some problems begin for me at least…

Dale is struggling to get through college, but something is about to happen that will make college irrelevant. With the aid of a Succubus he’s about to take on the role of the monster killing Reaper and his life will never be the same again.

Dale is a college student, bored out of his mind in class. At least he is until a Succubus named Cindy enters and changes his life forever. Dale finds out that what he thought was reality isn’t quite as simple as it seemed to be, and having Cindy in his life promises to make his live more complicated than he could imagine.

I think the one thing that bothered me the most in this story was that the way the characters spoke was monotonous. By that I mean it was hard sometimes to tell if Cindy was talking or Dale or any of the other characters when they appear. Reading their thoughts, what they say, it seemed to be a lot of nothing with the occasional important bit of information to be shared. I understand that Dale is young, but Cindy is a Succubus, she is supposed to have been around for a long time and I expected much more out of her that was seen.

Of course, she isn’t the focus of the story, Dale is in a “fish out of water” sort of way. But that’s the problem I think. There is so much for him to learn that it is like drinking out of a fire hose. Then he is dropped into situations that he isn’t ready for and things just go wrong from there for both he and Cindy.

Speaking of Cindy, while there is actually a lot about her personality, her role in the story, and how she acts as a Succubus, there were at least for me, pieces of her missing. There was too much emphasis on her being… well as she describes herself “a slut.” She’s more than that, but over the course of the story Cindy acts in that way most of the time, save for a few moments. That made her regrettably a bit too one-dimenisonal for my taste. Not to mention that what she really looks like is hidden away by emphasis on her being hyper-sexual.

I’ve said this before, but Succubi are more than being sex toys, but in this case Cindy is that more than anything else and it bothers me. She is smarter than that, you get glimpses of this being true at several points in the story, but in every case she is driven back towards being a sex toy and I didn’t enjoy that very much.

That’s not to say that some of the scenes between Dale and Cindy weren’t nicely hot, they were, but that alone can’t bring me to like the rest of the story for the emphasis being on sex alone. It could have been much more than that, but it wasn’t and that’s a real problem.

I’ll also add that it felt like there are at least five longer stories within this short one that are trying to get out. For me at least, the better thing would have been writing those stories and giving them life. The entire work just was too rushed, too frantic and it really did not need to be that way. Even splitting this work in two and then creating two stories as long as the original would have been better…

An interesting concept for a new universe really, but there are some bumps in the reading that bothered me. I think it would have been better overall if the story had set up a longer series of stories than darting from one threat to the next. Hyperactivity can be a bad thing and honestly in this case it was for me.