The Path from Truth to Love by TeraS

It’s warm as a costume goes… it isn’t feverish…

A Review of Summoning the Succubus by Gabriel Argonne 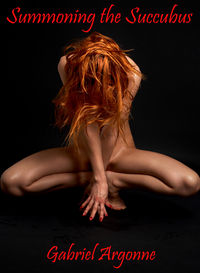 Summoning the Succubus by Gabriel Argonne

It is not often that a story focuses on the return of Lilith in a way that makes her a power and not simply a creature of habit. By that I mean, in general, when she appears there is nothing really told about what she has been through, what her desires are, and, more importantly, what her plans are to gain what she wishes.

Lilith should not be a cardboard rendering, nor should she be a simply evil being that acts as a monster. She should be both seductive and intelligent. She should be able to see the desires of others and bend them to her will.

She has to be more. I found a work that does that very well.

Lilith has been residing in Limbo for centuries, biding her time after he last defeat, when at last she feels the tug, a sensation long awaited. After arriving in the modern world, she begins the task of taking over and gaining power through the only means that she knows: sex. Can the world resist the temptation?

The work tells of Lilith being summoned back to the material plane, encountering those that summoned her, and then bending them to her will. While this might sound somewhat like a normal story about Lilith returning it is quite a bit more than that.

Lilith herself is not stereotypical in this work in that she is not seen as a thoughtless monster or creature that exists only to bring suffering. Instead she is given form, purpose, and desires that she wishes to make real. She speaks with a clear voice, a powerful one, and those that believed they would control her are quite mistaken soon enough.

It was quite nice to see that Lilith has a tail and uses it at several times through the very hot erotic moments, to turn the heat up a bit more. She is seductive, she is very much a Succubus in how she can see into the desires of others. There is also some nicely told moments of mind control that again made the story fit together well. But the most telling thing about Lilith was that she thought about her actions and what she needed to do in order to make the best with what she had around her. She wasn’t simply reacting or taking without concern or thought. She knows that taking too much would be a problem and she tempers herself.

At one point Lilith seduces and changes one of those around her and we see that happen step by step and it is written in such a way that the heat in her actions, what she says and teases, makes for something that is every bit as hot as the core erotica scene in the work. There is a certain way that Succubi need to be written and this author I think manages that very well.

The work is not a simple hot flash in that the work is not a sex scene with no meaning. There is reason, past and goals in Lilith. There are stories told about those that summoned her and the others that are drawn to her. It is a well told story about entrapment, submission, and more that is done very well. The only real issue is that it might have been triple the length it is to tell more of Lilith’s story, what she had been through, and what she plans next.

But it ends at a cliffhanger of sorts and in doing so left me wanting slightly. The build up, the heat, the entire work was wonderful… But then it stops suddenly and… I really wish that it didn’t.

Very well written, the erotica has lovely heat, there is a strong undercurrent of mind control to it which is done very well. The author gives Lilith a means to capture those around her and then bend them to her will that tells of the secrets they hold, but also of how Lilith sees those hidden wants and needs, twisting them to do her bidding. There was but one word error, something said to be singular, but in fact there was many of them around Lilith. Beyond that, the work is quite short and where the story ends makes it feel like there is more to come. I would have liked to see more of this work and I’ll watch for more. I think the world and story is remarkably well told. It would be a shame for it to end here.

One of the better concepts of Lilith in who she is, what her wishes are and what she has been through. A well told story of her power, her will and how that shapes those that she entraps in her plans. But it is short, painfully so when the story is told. I hope for more to this story as I found it fascinating…