Succubi Image of the Week 344

A Review of Incubus Daughter: Book One by Joy Laforce 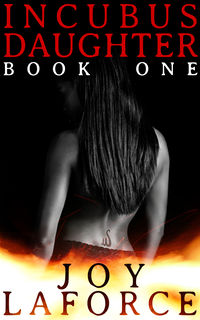 One question that comes in many stories is: Where did I come from? That is usually followed by: Where am I going?

The larger question for a Succubus or an Incubus is: How do I survive? That is a very important point to think about in the modern world for leaving a trail behind you will mean your eventual end. So, you become smarter, you become more careful, and you take only what you have to.

But what happens when your needs takes you in a direction that you never knew existed?

Succubi and incubi are demonic predators that feed on sexual energy and mate with humans to produce halfling children called cambions. Daughter of an incubus and a Puerto Rican woman, Cameron Rivera is one of these children. Since puberty, she’s balanced her cravings for sex and a regular life through one night stands and dream-time flings—until she meets Michael Hunter.

How much does he know about her?

How can he see through her illusions?

Is this what she’s been waiting for?

While this book is a hot flash in that there isn’t really a lot of character development that happens, before the two characters of the work get together in more ways than one… There is some. It was good to see something of who each of them is, their wants and desires, before the desires that Cameron has takes over for them both.

Having read the summary, I had a good idea of what Cameron would look like in my mind and that I found was good to have in that she really isn’t defined well. Most of that is because we see her not from her own perspective, but that of Michael and she is… fluid. By that I mean that her physical appearance shifts as one might expect a Succubus to do when she is baiting her prey. There are hints in the story of her nature, mainly in her eyes, but defining her as a Succubus really is a difficult thing to do as there are no other obvious signs of her nature.

Michael at first seemed to be a little bit “cardboard” and I wasn’t sure if he was going to amount to anything more than a one-night stand for Cameron. Over time however, his personality came off the page and he was a good match for Cameron in a lot of ways.

There are open questions of course. The biggest one being the last three lines of the work which will lead, I am sure, into the next book of the series when it appears. There is also a question that I wonder about Cameron’s needs and what she can do and how a little silver packet might come into play with all of that.

There wasn’t anything that took me out of the story from start to finish. However, I would have liked the story to be about twice as long as it is for two reasons. One is that I would have liked to see Cameron before she met Michael. What was she doing? Where was she? Why pick him exactly? The other is that the aftermath of their meeting seemed too rushed to get to those last three lines. I felt like I was missing something and that bothered me somewhat.

There is a lot of promise in these few pages with Cameron. When the next part of the story arrives, I will be there to read and see where the story goes from here… Because there is more to Cameron than what has been seen so far…