Succubi Image of the Week 343

Thoughts about the film Ancient Succubi…

A Review of Her Dreams Come True by Miranda Heart 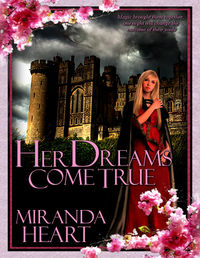 One thing that I look for in story writing is that the characters have a strong, clear voice. I want to be able to read their words and know who is speaking. It is important that they do not jumble into the same voice throughout the story for that is confusing and bothersome.

The other thing that I find interesting is seeing events take place from two vastly different realities. There is the reality of though that cannot see all around them and then the reality of those that can do so. But sometimes reality bites both sides of the story…

Shunning all that is holy, Annabelle’s soul now hangs in the balance. A gift from a witch seals her fate and thrusts her into the waiting arms of an incubus. The incubus, not being quite as evil as his Master gives Annabelle a way out. She now has one night to save her family and her soul.

Rediscovering love and finding his soul is the last thing Roshan has on his mind. Out of curiosity he’s worn the gifted necklace for months with no sign of his intended bride. So it was nothing for him to offer shelter during a terrible storm to a beautiful maiden. How surprising that the poor orphaned girl would turn out to be the one that would bring light into his soul. He has only one night to find the love he thought he’d lost all those years ago.

This is the story of Annabelle in truth and all of the other characters revolve around her. She has a destiny she has been told, and a means to know when she discovers it. But her belief wanes and ebbs and in doing so beings are drawn to her. They tempt her, trying to turn her from the promise. Try to make her give up her soul and lose everything.

All of them… Save one that is.

Leonides is an Incubus and his appointed mission is to claim Annabelle’s soul, but he was once human and he remembers his past unlike Baltmar, who commands him or Katarina, the Succubus that took him. In spite of the threat to himself he offers Annabelle answers in dreams that might guide her to her salvation… and more.

There is so much emotion in the thoughts of Annabelle throughout the story. She hurts and doubts, suffers and more. All around her there are those that press upon her, demand from her and she is worn more and more each day. The scenes are difficult to read at times, as she faces so much loss and pain with each passing moment.

Elsewhere in this world, Roshan also has been told a fate, a promise, one that he does not believe but still holds within him. He too has been challenged by the powers around him to fall into despair and loss, to give up what he has.

But one Incubus can make a difference and in doing so, his own world might change as well.

Leonides, Baltmar and Katarina are in truth supporting characters in the story, but their moments are as striking and compelling as that of Annabelle and Roshan. They have their own wants and needs, their own pasts and they deal with their own world’s problems that are falling around them as well. Occasionally kafkaesque, their parallel story with the main one is as gripping and holds its own.

The world created in the story, though only glimpsed at, is a tapestry in which the characters are deeply woven into. This is not pure erotica, not by any means though there are moments of desire and passions shown. It is about the story, about making choices and in the end that makes this a better story.

My only real issue was that at the end of the story there are a few questions left unanswered, events promised and not seen that I would have liked to. The promised futures for all of the characters would have been nice to see if only for a bit more than they are.

Just a lovely, emotional read with characters that I cared about. I just would have liked to see where the repercussions of what happened seemed to be going towards and what they meant…