Flight of the Just Bee by James

Yet another new low in Devil Costumes…

A Review of To Summon A Succubus by C. T. LaCreme 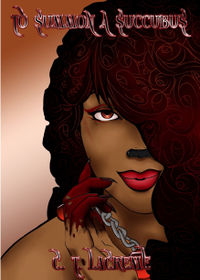 To Summon A Succubus by C. T. LaCreme

Personally I prefer that Succubi have strong personalities. That they are aware that they have power, desire, and need. But also that they have within them the knowledge of right from wrong and what that means.

To be a leader, to have that, means you need to be more, give more, act more. Every fault and need around you is something so very plain to see… but are your own as well? It’s an important question.

Jakira’s life as the head succubus of her coven is turned upside down when an unwilling human,Tony, is thrown into her domain. One harmless SEXT by Tony’s friend turns Jakira’s and Tony’s lives into an adventure that will never be forgotten.

Tony is dragged into a situation that he never expected to be in because of the ill advised decisions of a friend. Drawn to be at the mercy of Jakira, his greatest fears cause him to pause. But then he discovers that fear is nothing compared to a single promise.

Tony is a mystery. Really that is the only way that I can talk about him as there are some rather huge gaps in his story, which are alluded to. Beyond that, his reactions to what Jakira does in their encounters has a bit of oddness to them as well. That’s not to say that he isn’t interesting, for he is, but as the story progresses his “voice” in the story changes and I’m not sure why that was.

Jakira is the main Succubus character of the work and she is a very strong, wise, and focused Succubus. She has a goal, an important one, and woe to any that get in the way of that. Except for Tony. Her attraction to him and vice versa is a wonderful thing to see and it allows the mask to be taken away from Jakira, the one she shows to all around her, and that changes her as the story goes on. Like Tony, her “voice” changes through the story, but in her case I just had issues with the changes that came. Jakira the powerful seductress becomes less as the climax of the story arrives and honestly that bothered me.

While with Tony, she grew in character, emotion, and more and that was wonderful. More so when Jakira allowed Tony to be dominant over her. It wasn’t hurtful or awful… It was right for their characters in that moment and I loved every moment of it. When things turn wrong, the pain and hurt she feels was right for where she was, but, of course, her stubbornness makes her do the wrong thing for the right reasons.

That brings me to Ryland, the main Incubus of the work. Ugly. Unashamedly so. All that he seemed to care about was inflicting pain and forcing himself on others and to my own views, this is completely unacceptable. I do understand that there needs to be conflict, but when he appears is is simply brutal and did nothing for me.

Jakira’s coven and their method of feeding was rather unique and worked well, though the problems they have with technology were amusing and silly sometimes. I wasn’t too thrilled with the need for them to feed on both sex and blood. I’ve never really enjoyed the concept of Succubi or Incubi needing blood because that seems too vampiric for my tastes. Allowing that they feed from blood at the height of sex made some sense at least.

We do see several different kinds of Succubi and Incubi which I thought was fascinating, and when Jakira’s true form appears, it worked well for me as a whole, and, I have to admit, what Ryland really looks like is a reflection of his own horrors and darkness within. In that the author does give a lot of depth to the characters and that was well done.

The climax of the work left me wanting, but then it leads into a second work quite obviously. Still, the brutality of it just completely took away any sort of heat there was for me in the story and I found myself skimming the last few pages because it was just too much for my tastes.

There are several small word and spelling errors which need to be taken care of. Otherwise the characters are strongly written, the erotica is well done and as a whole it is an engrossing read. But the mixture of vampire and Succubus/Incubus really didn’t work that well for me and beyond that the actions of Ryland at the end completely turned me off.

I don’t like the concept of Succubi feeding through blood and sex. Honestly that makes them more vampiric than anything else… and they are not. Personally I find that it took a lot of what I enjoyed from the story and muted it. I will look for the second work, mainly because I think that both Jakira and Tony are more than they seem to be. I really hope that’s true because beyond them their universe seems so very awful in comparison to the two of them.