Succubi Image of the Week 342

When Harry met a Succubus

A Review of Incubi’s Lust by Rebecca Kind 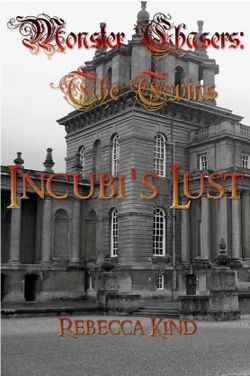 I don’t like coming into a story where it is part of an ongoing series of stories. The main problem is that you lose so much about the main characters, their history, what drives them and so on.

But it can also give a view of them that isn’t held by previous exploration of who they are and why they choose what they do.

A series about a group investigating the existence of monsters sounds like it would be interesting. The hope I would have is that, based on this story at least, there is a real payoff as the series progresses forward. Lots of questions, few answers…

…but lots of sex and mind control does make up for that… to a point.

Most people don’t think monsters exist but they’re wrong. We know this because we track them down. The six of us were brought together based on our individual skills. We hunt them down to study them and sometimes things get very interesting.

In this installment, the group is investigating a possible Incubus. The twins Angelique and Domonique are assigned to distract the man and keep his attention while the others work. But will the two be strong enough to resist the mans charms, or will they give in to the lust this strange man draws out of them?

Rumours of an Incubus existing in the world bring a team of woman looking to see if they are true. Two of them, twins, are placed in charge of distracting their target so the others can do their jobs. The problem is, what happens when the rumours are true and the Incubus has his way with the twins?

This story is, in its own way, a hot flash, but for me at least, it really does go past that point in creating an Incubus that seems very much like the ones that I enjoy reading about. He isn’t evil as such, he isn’t after the souls of the twins. That makes him very much more interesting to me overall. Adding to that, there is a really well written use of “mind control” that just fits his character and the situation very well. It isn’t written in a “you are under my control, poof” kind of way. It’s smoother, more seductive than that.

Throughout the sex there is a wonderful simmering heat that I enjoyed very much, it’s not silly or beyond the realm of possibility in what happens. It’s also a neat touch that the power of the Incubus is shown in what he is able to do not just to the twins, but those around them.

There is a moment in the story when the Incubus feeds and that’s quite neatly done in that it isn’t flippant or a simple “use up the twins and walk away” moment. There is a reasonable plot to follow which ends in a very interesting conclusion to the story that made me wonder about a few things.

I think I will go back and read the first story and probably follow the entire series as a whole, mostly to see if the Incubus appears again… There are a few of the characters in the series that I think could use some time in the Incubus’ thrall…

Overall the writing is quite good, and there really isn’t much to nitpick over save that at a couple of points there were odd characters that appeared like equal signs that might have been an error on Amazon’s side of things and not the author themselves. I think the strongest thing was the personalities of the characters, that was done exceptionally well. However some of the choices made by Angelique and Domonique didn’t sit right with me, though needed for the plot however in they are who they seem to be, they would have not done what they did. That’s quite vague I know, but it is important to the plot and so I won’t spoil it.

In spite of this being part of a series, or because of it, the interplay between the characters took a lot of the enjoyment out of the parts where the Incubus appeared. Mind you, I would like to see him appear again if for no other reason than to see what happens…