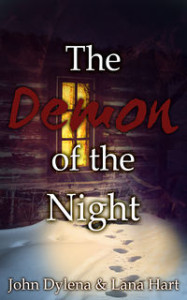 The Demon of the Night by John Dylena and Lana Hart

The question of one’s origin, of who someone is matters. When it is of a character whom you love, care about, and most of all, respect, that origin means a lot more than some might expect.

One of my favourite authors, John Dylena, has written with Lana Hart, a story that connects to the Raethiana series, a series that I dearly love and cherish more than I can possibly say. It is a story of finding one’s inner strength and making a choice, one that from the beginning cannot see the ultimate path to be.

And what a path it is to tread upon…

The year is 1684, and the colonial village of Ashtonburg, Pennsylvania is experiencing a winter of death. Four men in half as many months have been lost to some foul beast leaving only brittle husks in its wake.

Ella Archer, wife of the town drunk, can’t help but to wonder what this creature is… and if it can help her escape the wrath of her husband.

In her quest for freedom Ella must make a choice to condemn or forgive. What price will she pay to become the mistress of her fate?

Ella’s life is about as close to hell as you can be without actually being there. Her husband, all of the men in the town around her, see her as being less than human, ignoring the harm that her husband causes and more. What they do not see is the intelligent woman beneath who understands something they do not. Strange deaths and she is the only one that sees the connection. Ella decides to seek out the one responsible and when this happens, she finds that the price of freedom is one unexpected.

The surrounding cast of characters around Ella are all male which brings a rather unique point of view in the story, that of seeing the world of Ella from her point of view, both internally and externally. Of the men that surround her, not one of their internal thoughts are heard. While the attitudes of the men towards Ella, and sadly, in particular her husband, are of that time in the past, looking at what transpires through the story is quite hard to read at times.

There is abuse, so much abuse that Ella suffers through from the first moment she appears. That shapes her thoughts and actions as the story continues and, honestly, the choices she makes are ones that are forced by the time and society around her. None of them are right or just from the perspective of the present, nor are they ones that should have been treated as they were in that time. But it is historically the truth of that time, sad as it is, and with that comes the question of the deaths of late where Ella lives.

It is quite telling how openly dim the men around Ella are, and that, more than anything else is their undoing. Ella’s husband is a prime example this, but, again, it is the society that gives him power regardless of his actions. There is but one single moment of defence for Ella and that is a fleeting thing.

The turning point is when Ella realizes what has been happening and puts one important piece of the puzzle together. Doing so takes her to an internal struggle which I thought was well told and carried forwards through the story. When she makes her choice and seeks out the one responsible, that’s where the story turned in a direction that answered questions I have had about Ella and as well Norrana.

Ella finds out the truth, Norrana opens the door to something that Ella desires, and she has to make a choice. Considering all that has happened to Ella in her life, it is a choice that was inevitable, but also justified, right, and liberating.

The scene where Ella sees Norrana for the first time, sees what she is capable of, and then, at last, comes face to face with what Ella has been told is the undoing of all women at that time in history turns into something… considered. The thoughts Ella has, the consideration she gives and then the process she goes through to make a choice all work very well and felt true to her character here and that of the character she becomes.

There is one scene of erotica in this work which worked well for the setting and tone of the story, but this work isn’t about that single scene. It is about Ella making a choice. Being the one to decide her future. That’s a powerful story in its own right and isn’t forgotten in that moment. That was important to me and spoke to why Ella is as much as who she is.

The writing is excellent, Ella is a strong voice in this work, the scenes are richly told. There is a point, a purpose. For me this origin story connects truly to the Raethiana series, does not change that series, but strengthens what we knew about Ella there. That matters, very much to me and for that new door into Ella herself, I am very grateful to John and Lana for giving this part of her past a voice and be told.

A fitting, truthful and real tale about the beginning as all such stories should be. Revelations that looking back on the Raethiana series make what happened in that series more powerful and in that, assuredly, Ella made the right decision.