Where’s the inferno in this costume anyway?

A Review of The Succubus Inside by D.E. Garlow 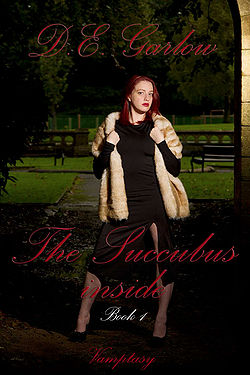 The Succubus Inside by D.E. Garlow

Lynn and Gene are very much in love and enjoy a very close bond. Their sex life is already heated up. What happens when they are possessed by lovers from a past life? Things get hotter and more dangerous as the Incubus and Succubus lovers take control of the present day couple; taking them on the ride of their lives.

Lynn and Gene are… well… Let’s say that they really haven’t a problem with sex, enjoying it, and indulging in their fantasies. They become more and more adventurous over time until one day a friend of theirs… sees there is another couple in the room with them. It turns out that the invisible couple, one a Succubus who is attached to Gene, and an Incubus, attached to Lynn, are whispering thoughts to the pair and feeding on their lusts and that of others. At least until they are discovered that is.

What happens next is that the Succubus and Incubus take matters into their own hands, Gene and Lynn not knowing what is happening until the clues, and the police, come knocking on their door. What follows is a bit of a cat and mouse game punctuated by some very hot scenes before the climax comes and the story ends… not quite in the way one might expect.

There is a bit of mind control involved in the story as well, both in how Lynn and Gene are controlled by those possessing them, but also in how they use their powers to lure others into their midst and, to be blunt, consume them. I am quite glad that when that happens the description of the events are short and to the point without too much gore or descriptions of what happened. It would have been far too easy to do so and I was pleasantly surprised when I saw that the author did not go that route… It made for a much more enjoyable story…

The Succubus and Incubus are never named in the story, which is a shame. I think I would have liked them a little more if there was more to their personality than several murders and some moments of passion. The seduction is very hot… absolutely so… But that alone which perhaps three sentences in total from them is really not enough.

The story itself isn’t one sex scene after the next, though sometimes it comes very close to falling into that situation. There is plot, there is mystery and intertwined to that comes some very hot erotica that is deliciously told. There are a few points in the story where a word is wrong or misspelled, but this is very minor in the overall scheme of things.

When the end of the work arrives, there is an opening for the story to continue. The thing is that I would hope, if it ever does, that the beings involved are more intelligent than they were by the end of the story and hide themselves better.

A really fascinating story that does stray slightly towards horror and yet manages not to make that theme the core of the work. It is a shame the author no longer has it available for the heat and story that is within it…