A Review of The Becoming by C. Harrison-Lane 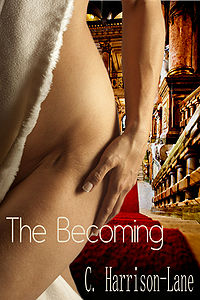 The Becoming by C. Harrison-Lane

What are dreams made of is a question that haunts everyone at some point in their lives. When that question includes Incubi, three Incubi, and each of them is a reflection of one’s own hidden desires… Then the dreams are something more. They uncover truths never quite seen or understood and in that you can be changes and transformed into someone that you wouldn’t recognize in the moments before.

And in the end, the question of what is real and what is a dream can haunt you always…

Lorna wakes up, naked, with only a scrap of white cloth to cover herself. She has no idea where she is or how she got here, only knows she is in a vast manor that she can’t identify. She walks the halls, barely dressed, calling out for anyone, but she seems to be alone.

But only seems to be.

Lorna finds herself in the clutches of three wickedly handsome incubi, who are overcome with desire for her. In order to discover their secrets, Lorna will have to spend the night with each of them – despite how they frighten her. Three nights; three dreams. She will have to play their games, and pray that she comes out of them with her sanity. As she delves further into their desires – and those of her own subconscious – she may discover that her need to escape may not be as important as getting her fill.

Lorna awakes to find herself with three strangely compelling men, Aiden, Sebastian and Devon who all desire her… and they are all Incubi and need her more than she can understand at the beginning. She dreams with each, being transformed by each until she discovers a truth about herself and where that leads.

Incubi project the dreams of others onto themselves and it is that concept which makes this work really quite interesting in many ways. Each of the Incubi possesses a different kind of erotica heat and passion which they both take and give to Lorna with each encounter. One is loving, another dominant and the other is submissive. While that is each of their personalities, the actions and personalities are also those of Lorna which makes the heat of each encounter much more engrossing and entwined than if she simply was controlled by each of them.

While the three are Incubi, there is no doubt of that from their words and actions, they have no signs of horns or tails. They are however all very much the image of the sex fantasy males which Lorna is drawn to. Their own explanations of what Incubi are tend to be a little bit vague, which is a shame. I did like the hints of some light mind control which added depth to the story and as well the use of their powers in the dream world were delightful. Their actions in the real world with Lorna were hot as well, but what was more attractive to me was that Lorna, over the course of the story, wasn’t “perfect” after each encounter. She ached and lost energy. She felt the moments held between each of the Incubi and they were not forgotten. It made for a better story overall with consequences and actions to all of them in the work.

The work is truly an engrossing read and was wonderful through Lorna’s experience with the Incubi. But when the moments are past and the conclusion of the story arrives I found myself both confused and somewhat saddened with how it came to be. It is not entirely clear what happens at the end of the work, but how it is described, what Lorna does… it saddened me. I hope that I am wrong about my thoughts, but the signs all point to what I fear is an ending which takes all of the passions and heat of the story and makes them… less. I hope not for the rest of the work is some of the best Incubi erotica that I have read in quite some time…

Wonderfully written, lovely characters that bring out moments and transformations unexpected. The ending gave me pause and concern in many ways which took some of the heat and enjoyment from me. Not all, not by any means, but the question left at the end are haunting in their own way…