She’s a Devil, but not a Succubi in this costume…

A Review of Desperate Desires by Sabine Shepard 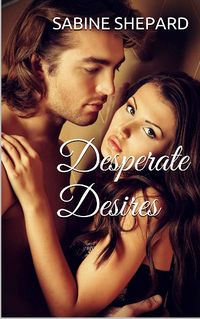 I find it interesting how many Succubi are written to be, for lack of a better explanations, slaves to their own needs. Not desires, and not wishes, but the need to feed from others and what that entails. While that is the source of many stories, it isn’t all that they are, nor should it be.

A larger question, and it is actually a more important one, is the question of them being trapped or ensnared through their needs and what happens from that point forwards. What is the cost, what does it mean, and the other that traps them, what are they really and are they more than they seem?

Some creatures stalk the night in search of prey to satiate blood thirst needs. Others, equally dangerous, stalk the night in search of carnal pleasures to ensure survival. Rachel Morina had been roaming the earth as a succubus for more years than she cared to remember and somehow she never tired of the perks of the job – including gorgeous men who fell down around her, willing to satisfy her every need. Her mood and her appetite constantly evolved but her primal need for sex never faltered. But no life is perfect and Rachel knew this all too well. While she could have any man she wanted, there were always dangers that potentially lurked around every corner and as a result, she could never stay in one place too long and she could never have the same man more than once no matter how well-endowed or particularly talented he may be. Above all else, she could never know love.

Devon, however, plans to change everything.

Rachel is a Succubus, of that there is no doubt. She is seductive, she can have anyone she wants without fail and has done so longer than she can remember. Seeking out her next meal she encounters Devon, who promises her that he will be everything that she needs. And Rachel discovers that his promise is more than words… and is far worse.

Rachel herself is an interesting mix of need and wants which I don’t see in many stories about Succubi. She is independent, but at the same time in encountering Devon, there’s a need within her that he stokes and in doing so changes Rachel in ways that are in many ways difficult to deal with. She seems to be very human in appearance, no horns or tails, but then this is but her first appearance and really what she physically is like really isn’t talked about.

Emotionally however and character wise she has both her darker side, which seems to be more of who she is, and a side that is… lost. She is looking for something, she admits to it. but to find it I think is a larger question that she’ll need to deal with. Or could if not for Devon appearing.

Which brings me to Devon himself. It isn’t clear what he is exactly, though I suppose calling him an Incubus is as good a description as any other. The thing of it is that, as a whole, he starts out as a very interesting and seductive character but then turns very dark, unlikeable, and in the end took a lot of the heat out of the story for me in his actions and demands.

The erotica runs throughout this work, but there is story and quite a good one really that balances things out well I thought. The only problem I had as a whole was Devon’s possessive attitude and actions which led towards moments in the work that cooled the heat for me quite a lot.

Overall written with good characters and an interesting hook for the story, it has a lot of promise to it for future parts, which the author notes will be appearing. It is just the many questions about Devon and his actions that give me some pause and took away from what otherwise is a very deep and compelling story.

This appears to be the opening to a longer series about Rachel and Devon which I hope will be more than the opening chapter seems to show. While Rachel is a full character, there is really nothing known about Devon save his actions and those, at least for me, were less than attractive. Still, I have hopes for the series and I think I will not be disappointed in them.