A Review of His Naughty Succubus by Jennifer James 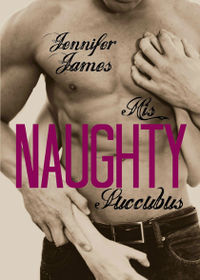 His Naughty Succubus by Jennifer James

One of the things that I hold dear is that every soul is meant for another. The most difficult part of that is having them meet, see that truth, and then understand it. Really that is the most difficult thing. How can one prove, beyond a shadow of a doubt that the connection is there, it is real, and it matters.

It’s far more difficult when you are a Succubus, and the legends that tell what you are do not reflect who you are and what you really are. The truth comes out in the end, and in that moment… things change.

Ghost hunter Liam MacDonnell has decided to do a special Halloween investigation on an infamous haunted house. He’s hard up for some action of the ghostly kind, and is looking for a sure thing. Lucky for him, cursed succubus Trinity Bell is waiting for him, and has a special assignment she needs him to bring to orgasmic completion.

Liam investigates a haunted house and finds that it is haunted by a Succubus. But she’s nothing like the legends say she should be. Trapped because of a curse, she hopes to be finally released by Liam.

This work was originally published in the Naughty Tricks and Sinful Treats anthology in 2013, and I honestly cannot believe that I missed that work when it came out. So, for me, this was a completely new work from Jennifer that I hadn’t seen before. Having read it at last, I have to say that I want to see a series about Liam and Trini. Leaving things here, where this work closes, would be a real shame.

It’s a wonderful mix of passion, mystery, and redemption that I loved from the first word to the last. What I particularly liked was how the mystery was ever so slowly revealed. There are hints about what Liam means to Trini and the reverse is true as well, but it’s very well hidden within the action and confusion that Laim faces from the first step he takes into the house.

There are quite a number of twists and turns in this work to do this and really how that is played between the two characters, the secrets each of them have are held until they have to push through the confusion, mistrust and misunderstanding.

Liam, from the moment he appears has something about him. He seems to be aware of it, if only fleetingly and unclearly. His past is wrapped up in some questions looking for answers and what he has been through since becoming involved with the supernatural are hinted at. That has coloured his attitude and view of the world sadly. But the most troubling thing is the question of why it troubles him so, why he is so connected to the supernatural, and what that all means. The answer to that question was something that made this work special.

Trini’s story, when it is completely told, is both heart breaking and at the same time proof that you can do anything for the right person. Even suffer through a curse, knowing that one might never escape it. But trusting nonetheless.

For Trini, really it is a matter of trust, of seeing that in herself and in Liam as well. Liam has to accept and trust that the legends about Succubi are not true, that Trini will not kill him like the legends tell. That there is something more about her. Trini is, for me, an example of what I believe that Succubi and Incubi are. In her actions, and that of Liam, that truth comes out at last.

But before that moment comes, before the truth about Trini and Liam is told, there are moments where Trini’s fears rush at her. Actions which Liam takes that put everything on a knife edge of whether things will work out for the best or not.

With all of that there are some deliciously hot moments of erotica as well. A slight hint of a submissive touch to Trini’s character comes out in them that I thought worked well. The raw unbridled passions that connect Trini and Liam together are told in a way that just worked right for both characters. Some of the more dominant actions taken by Liam felt… slightly off… at first, but as Trini’s story was told it made a lot more sense. By the end of the work the pieces all fall into place and that I appreciated.

The work ends with a promise, an opening to what could well be a future series about Trini and Liam, and that’s something I would dearly like to see. The tease, and really it is a tease, is simply the perfect opening and I hope the author does travel along that path.

Well written, two characters that I really cared about from start to finish. A setting that held throughout and kept me turning the pages. There are questions unanswered of course, but they didn’t have to be in this work, but I hope they would be in any future stories about them.

I really want to see these two characters appear again. How the story ends just begs for it to continue. More so as Trini just fascinates me and I would like to see more of her being a Succubus and one that I personally love in attitude, intent, and most of all… desire. And then, of course, there is the question of Liam and the secrets that he holds as well.