Succubi Image of the Week 339

A Review of Heart of the Succubus by Kay Glass 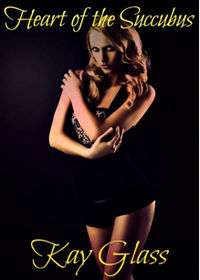 Heart of the Succubus by Kay Glass

It seems like there is a new trope for Succubi that appear in stories. Ever since Lost Girl the thing to do, when a Succubus comes into her powers, is to have her kill her first boyfriend, lover, or someone else close to them. I think that’s getting old to be honest in a lot of ways.

As a means to starting a story, to tell where a character comes from, I can understand why this might be a good choice, but if it isn’t used in the right way, for a purpose, a story that means something by the end, then it doesn’t really matter does it?

The one thing that any Succubus cannot forget is their humanity, No latter how inhumane the world is around them. A story that tells of that is, for me, something more.

Liliana’s powers were awakened on her 18th birthday. Since that long-ago night, she’s worked for the Vampire Review Panel, using her powers as a succubus to punish the guilty, draining them of their very essence.

But what happens when the one the vampires count on to punish the guilty falls for the one she’s supposed to kill? When Liliana finds a name on her list that she recognizes, how far will she go? And which will be more important- her life, or the life of another?

Liliana is from a small town, but she has big plans for her future. On her eighteenth birthday she is on the cusp of having those dreams come true, but a night with her boyfriend that reveals the truth about her ends them. She is drawn into the world of vampires, to do their bidding, and becomes a killer for them. But when she is sent to kill again, and discovers the truth, she has to make a choice. The consequences be damned.

The vampires that Liliana has to live with, and is commanded by, have no humanity. Not even the one that Liliana lives with really has all that much humanity in her. Perhaps there is a slight hint of it, but as the story progresses that hint is smothered and just hurts more and more.

Liliana’s past is tragic, painful, and all of that is so very clearly told. She’s made into being something that she really isn’t by force and that takes a toll over time. Who she was at the beginning of the story is lost when we see her in the here and now because of all that she has had to do. There’s a lot of story in that which isn’t told, regretfully, and could have been.

Telling the intervening years, the pain, the moments, perhaps the thoughts of knowing what she was doing was wrong, could have made this from a short story into a full novel. There has to be years of learning, discovering, and seeing all of the darkness around her and how it changed her most of all.

Eventually the turning point in the story comes when she is sent back to her hometown, to face someone she knows and it commanded to kill them. But then she learns the truth from her victim. A truth that places Liliana at odds with the vampires and she has to make a choice. It is a simple question of morality in the face of beings that are immoral. Either choice will damn Liliana, there is no doubt of that, but making the choice, really the only one that can be made, tells something more. It tells about Liliana’s humanity returning to her, giving her the strength to care, to make a choice, and to know, fully, that the choice is the right one for the right reasons.

There are some moments of erotica in this work, but they are not the core of the story. The core is Liliana herself making a choice after having no choice at all. That’s an interesting story and for me made this work so much more than I expected it to be.

I wish that more had been told about Liliana’s life, all that she had been through. I would have liked to see more of how her life unfolded and not leave it to a “that was then, this is now” passage in the work. There was a lot to be told, it wasn’t, and that bothered me when the story was over in a lot of ways.

It’s a shame there wasn’t more to this work, more so where the story ended. I had hopes for something more, but then considering the themes in the work, the characters around Liliana it wasn’t meant to be.