My definition of Devine must be different I think…

A Review of Almost Good by Carl East 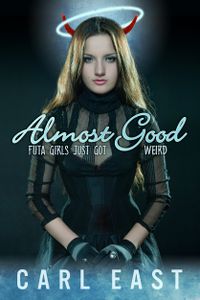 There is a question that sometimes comes about when Succubi are involved in a story, That is the question of can they not be evil? I think the better question is, who can, truly, not manage to do something, if not evil, then at least mischievous.

And what follows that question is, what happens when a Succubus makes a choice that puts her life in the hands of others because she has no other choice. Who can she trust? That question can make for some interesting partnerships…

Clair has an unusual gift, she can detect strange. Yvonne’s as strange as they come, because she’s the first Vision Walker Clair’s ever known. With the power Yvonne possesses along with a Succubus, a Fallen Angel and a shape Shifter, the bad guys better watch their backs.

Clair has a motley crew of friends, or almost friends, with supernatural powers. Together they help who they can, but want to, somehow, do more. They rescue Yvonne from a bad situation and through her their adventures really begin.

The cast of characters in this work are interesting in their own rights and each really could be the focus of a single work on their own. There is background hinted at for each of them, but only hinted at and that leaves a lot of questions to be wondered about. The Succubus of this work, Candy, for one really interests me in that, by what is told about her, she decided that she didn’t like what “they” wanted her to do and she left, finding a place to hide with Clair and starting their group. While Candy is a Succubus, and there are some very hot scenes with her, she’s also, if not the leader of the group, certainly the brains in a lot of ways.

There are several transformation scenes in the work, one female character becomes male, some others, including Cindy, gain male sexual abilities, or become completely, or partially, male for a time, and there are some touches of mind control as well in the work. Add in some short adventures for the group and there is a lot packed into such a short story.

I think that’s the main problem with this work. There are so many things going on, so many events that they all have to deal with, that the work seems a bit rushed to me. With that there are also a few errors, calling one character “he” when she never was in the work, and a few spots where the text read a little off, or clunky.

But past that, the characters make up for most of that, the erotica, and there is a lot of that going on in this work considering that all of the main characters are female, has some really nice heat at several points. But with that there are moments when some characters do things that seem out of place to what they have done before. And they are not being mind controlled by someone else when that happens.

It all makes for what could be an opening to a series with these characters, one that I would read and follow not just for Cindy who fascinates me as a Succubus, but all of the characters. There are a lot of tales to be told about them all, never mind all of the different couplings that could happen. But the story needs to slow down a little, gain traction to tell more story and a bit less sexual situations would I think make for a better story than there is here.

The work needs one more edit to catch quite a few errors. Otherwise the characters are interesting, Candy the Succubus being for me, really very much so for her history that is not told, but then no one else’s really is either. This work needs a second book if for no other reason than to tie up a lot of plot threads that need resolutions.