Succubi Image of the Week 337

A Review of Post Secondary Succubus by Lacey Layton 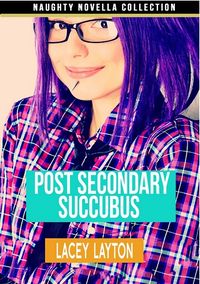 It is said that when one goes to university, they find themselves. That’s a good thing really, but if one is a Succubus, the path to finding yourself gets a bit more complicated than usual. With that comes loss, strife, discovery, and something unexpected… love.

But that is a confusing thing in itself and if you aren’t prepared for the consequences of some unwise decisions then things can either go very wrong or very right…. It depends on who you believe in, and who you come to trust.

Kaylee is a woman with a secret. She is a succubus. Her gaze can capture a person, her words can make anyone want her. She is walking desire, a living and breathing temptation to millions. But Kaylee lives in the background. She wears flannel. She keeps to herself. And she never keeps anyone around long enough to catch on. For her, the power she wields is a curse. Now at University she meets Mike, a man that tells her in no uncertain terms that they cannot see each other. Her usual tricks do not work.

Then she meets Galvin, a slick, mysterious man who is also a succubus. He is not shy in getting what he wants. He has his eyes set on freeing Kaylee from her old life. And on encouraging the growing tension between them. Torn between two men, Kaylee has to learn to stand her own ground and become the woman she has always been. She just doesn’t know if that means she will lose everything she has in her life.

Kaylee hides herself away as much as she can because she’s afraid of what she might do if everything goes wrong. But now she’s going out in the world, her first step is university, and something has to change. The question is, who’s going to show her what’s the right way to do that in her life?

Kaylee is a Succubus, there is no doubt of that from the first moments of the work. But the thing of it is that even with her inherent Succubus nature and powers, she’s got something more going for her. She has a personality, a dear friend, and a small little ember of hope inside of her that things will be better. It’s a troubling story at times, to see how Kaylee looks at herself, the amount of self-loathing that sits under the surface. There is a good reason for that, but it’s hard to accept to be honest for where the story then breaks out to.

She meets Mike, who has a story about him that really builds over the course of the work. He’s really as much as solidly created person in this work as Kaylee and that’s important for many reasons. In the end, when his truth appears, it makes a lot of sense looking back over the story as a whole which for me was very satisfying.

She also meets Gavin, who for me was… honestly nothing much to me. I didn’t care for his attitude, his nature, and most of all, I didn’t like how he acted towards Kaylee for one, and as well another character in the work. More so, when the truth came out about Gavin and someone very close to Kaylee… I honestly expected it from when it actually happened in the work at the beginning of the story.

I have a small nit with how Gavin describes himself as well. I’m sorry, but you are not, in any way, a Succubus. If Kaylee is an example of what a Succubus can be when she’s at her best, then he’s about the worst. And no, the flippant remark about gender roles and so on didn’t cut it for me. Incubus is fine, and I think the way Gavin acts there needs to be a clear division between him and Kaylee honestly.

There is a very interesting point in the work which does pose an important question about what Succubi, and for that matter, Incubi do to others. How Kaylee reacted to that, when she was confronted with it was, more than anything, true to her character and honestly it turned the story from what could have been something mediocre to what it turned out to be.

Kaylee finding her way out of her shell, coming into a better understanding of herself was well done and I liked where that part of the story went. It also posed a lot of moral questions for her, ones that really do matter and to watch her find her way through all of that towards the climax of the work was wonderfully done.

There’s a bit of a tense problem with some parts of the story. The author falls into the past tense all of a sudden in one encounter, and then flips back into the present tense and that for me was a bit of a stumbling block. But otherwise, the characters are solid, the story is heartfelt and has a lot going for it in many ways. Add to that some very hot Succubus mind control erotica and it’s a wonderfully told work that I enjoyed very much.

A cute, funny, self-depeciating story in many ways. But it is also a story about the truth of figuring out who you are and who really loves you in spite of yourself. Something important to remember I think.