A very interesting mask of horniness…

A Review of The Succubus’ Sub – Session Ten: Under Lock and Key by John Dylena 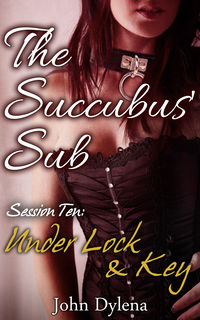 The Succubus’ Sub – Session Ten: Under Lock and Key by John Dylena

There comes a time in a relationship where the truth has to come out. The question is, what truth is it? Is it the truth within one’s self or the truth of the other? Is it a moment when your true needs come out or the realization that something you never could admit… you need to.

Having that truth, then asked to make a choice which has consequences that might put paid to that truth is a hard thing to face. Sometimes to be able to takes your own faith in your submissive and their’s in you.

The spell that transformed Brett into a succubus was a success. In fact, it was too successful. Still in the demonic form when it was supposed to wear off only after a couple of hours, Myserra takes her sub down to the underground to research the cause of his semi-permanent transformation.

A trip that involves a close encounter with an incubus, a bloody revolution, and a discovery that will change the relationship between the succubus and her sub forever.

Myserra has a problem. She turned Brett into a Succubus and the spell isn’t wearing off. Concerned, she goes off in search of answers and in doing so she finds that what she gets are the answers to herself… and Brett finds that those answers give him all that he has ever wanted for being a Succubus’ submissive. And a few things that he never expected he would ever have.

I think that the core of this work is the understanding, finally, that Myserra has when she comes to admit, not just to Brett, but to herself, that she does love him, need him, and more than that, finds that all of the emotions that she knows he has for her, she can see in herself. That really marks a shift in their story and moves it towards a resolution which answers a question that has been running through the entire series to this point. The solution makes sense, and I like where it seems to lead and I hope that where the story goes forward from here is all that I think it will be.

Brett has his own moments of trying to come to terms with being a Succubus, being wanted by others. But within that comes the one truth he holds onto, that grounds him, and as much as his own curiosity and thoughts tug at him, Myserra is there, just in case. There are moments when Brett has to face events and actions around him that test him greatly, but in spite of them, he holds true to that which is important to him. Myserra.

I think that the most interesting part of the work is when Myserra and Brett go in search of answers and they find some. Actually more than they expected in a lot of ways, but also that what they are offered as a solution is both a boon and a bane. Choices are made and then events overtake them both leading to a moment when Brett’s greatest fear stares at him.

There are some joyfully fun moments nonetheless between Myserra and Brett, and I have to say that they made me laugh at times and they worked really well with the two of them. The point at which the work focused for me was when Myserra was asked who Brett was. That admission, followed soon after by the words that Myserra really hasn’t said to Brett meant a lot to me and I was glad to see them.

A story of joys and relief mixed with worry, temptations and needs. A fitting closure to this part of the story of Myserra and Brett that for me worked really well. Their characters came fully to the fore, those around them added to their world and provided a glimpse into the what-ifs and could-he’s. Fully enjoyed and really the best of the series by far for many reasons…

A satisfying closure to this part of Myserra and Brett’s relationship that I felt answered a lot of questions about each of them. Emotionally told and in that telling comes the truths within each of them. Something that, for me, I hope the author returns to sometime as their story, and that of this universe isn’t done by far.

A little postscript. I’d like to thank John for allowing a particular raven haired, red tailed Succubus to appear. It was, for me, a lovely thing to know that she is seen as a friend to Myserra and that is something that made me smile.

Even if she is a little mischievous. Just a little…