A Review of Hotter than Hell by Jemma Chase 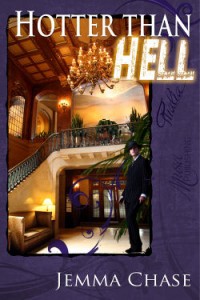 Hotter than Hell by Jemma Chase

A sightly different story to review this time on the Tale. It’s not so much a story about a Succubus than it is about two beings trying to find reasons. In the end the reasons they seek turn out to be very close to home in a lot of ways and in the end some truths they both learn.

As well, it isn’t a work of erotica so much as a mystery to be solved. Story with erotica is so much better than erotica alone by far.

It’s summertime in Phoenix, Arizona, meaning it’s hotter than hell. So when Ruby Prince walks into the Private Investigator Nicholas Masters’ offices bundled up like she’s in Nome, Alaska, Nick thinks she’s crazy. But what Ruby wants is to find someplace truly hotter than Hell, and what Nick discovers changes his life…forever.

This is an example of the kind of story that I like more than anything else. There are two characters that are real from the beginning, a situation that isn’t over the top or beyond the impossible, and what happens from that first moment is the core of the story. It’s about discovery, understanding and in the end, acceptance of the impossible.

Ruby may not be a Succubus. I say may because there really isn’t any real evidence that she is one save what she does to Nick just by being near him. Whether that is because of her nature or something more, she likes sex and isn’t afraid to say so and take control of a situation when it comes. She has no horns or tail either, but in this universe it makes some sense that she wouldn’t. Who she is, what that means and then the why and how of her being where she is really struck me as being something special.

There is a little film noir attitude in this work, but it’s more in Nick’s character and how he is described, otherwise it is set in the modern world. I enjoyed Ruby’s attitude, how she told just enough but not everything to Nick, leaving him to connect the dots and come to a conclusion.

When that moment comes, he makes a choice and the way he does, the reasoning behind it, and how the story comes to its conclusion, are amazing. You can sometimes do anything for the right person for the right reasons, in this case especially so.

The other thing that I thought was unique was Ruby’s reality, where she came from, her parents, and how everything connected together. Much of it I didn’t expect, but the last page of the work, where the future is told for the two of them just made me want more. There is closure to the story, but in truth I can see so much more that could be told about the two of them.

Sadly, this work has been available for some time now and there hasn’t been another story about them since this one. It’s a shame and I wish that wasn’t true… But I’ll hope for something someday…

Just wonderfully written, loved Ruby more than I can say, and really a heart-warming story in more ways than one.