Not really that much of a Smoking Hot Devil costume is it?

A Review of For Love of a Succubus by Leona D. Reish 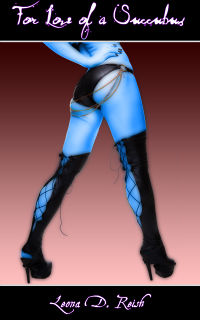 For Love of a Succubus by Leona D. Reish

The question of the family of any Succubus, to me, makes for a very interesting story. The relationships between mother and daughter are important ones and they do shape the person the daughter becomes. But it also matters when the siblings, specifically brothers, are involved and then a very difficult question appears.

What if the Succubus wants her brother? What if the brother in turn isn’t quite sure himself about her, other than he has to protect her. What if she’s doing the same thing for him? What happens when it all comes to a head in one night and they both have to figure out where their relationship is going… And are they really brother and sister or something else?

Living with a succubus can be trying at the best of times, so when Theodore overhears the demonic woman shout his childhood nickname in the height of self-pleasure; their relationship is destined to propel past simpler, platonic affection for the love of a succubus. These lustful, blue-skinned demons come with many tricks and talents, however. After this sleepless night, nothing will be the same between them.

Theo, also known as Teddy has a problem. His mother is a Succubus, as is his sister, and she wants him. He doesn’t know how to take this and in a moment of anger their relationship suffers. Then their Succubus mother has her say and Liz, his sister, makes things up to him… and very clearly tells him what she wants.

Liz, the Succubus of this story, is actually a kind of Succubus that isn’t written about very much. She has blue skin, not red or “normal” human skin and some might see her as being corrupted in a way, based on that. In truth she’s a lot more complex even if her nature need for sex gets the best of her at times. She cares about Teddy very much and in that comes a need that she can’t hide well which causes a conflict between them.

Liz’s mother is, for me, a lovely example of a mother that cares about her family and wants only the best for them, whatever that is. She’s fun, but also she’s a little bit mischievous and that made me like her very much and I wished she had been around a lot longer than she was. There is a little told about Liz and Theo’s father, but he, regrettably, never appears in the story.

Theo himself, being the centre of all that is going on around him, is lost in a way, but also very protective of his family, especially his sister and that felt right. While having to deal with a family that is all about sex and seduction isn’t an easy thing to do, the way he felt about his sister, how he wanted to protect her most of all… That really was touching and I respected him for that.

But Liz gets advice from her mother, finds Theo sleeping on the couch, and it isn’t long before there is some very hot Succubus taking control of things erotica that I did enjoy. It’s some of the best writing of a Succubus having her way with someone that I’ve seen in some time and I liked how Liz spoke, acted, and reacted to Theo as the story went on.

The story ends on what I thought was a lovely place, and really I’d like to see a part two with Liz’s mother being around more, or Liz and Theo being together, maybe Theo coming into his Incubus powers or something like that, but there’s a problem with that thought and I’ll get back to it.

The work is written well, though there are some minor errors in it like “breathe” for “breath” and some odd sentence structure at one or two points. The real problem I have is more of a relationship issue between Theo and his sister that I can’t quite get my mind around. In the summary of this work it is described as “blue-skinned succubus and adopted human brother” sex. But reading through the story, it changes to “succubus and human brother” then it changes again to “succubus and half-incubus brother” and this really bothers me a lot. I’m not sure which one of these is correct in the story and that would be something I’d like to know. What is said by Liz as the story plays out and she seduces him, makes me think that their mother is the same as is their father. It’s just very confusing and that part of the story needs to be straightened out.

A very hot story with really some wonderful Succubus evil, but in a very good way. The problem is that the base story is confused. Are they sister and adopted brother? Or is he really her brother? It keeps shifting around that point and confuses things which bothered me. And please, a little bit more editing as well?

Regardless of all of that, this is the best work by this author that has to do with Succubi I think and they have written a number of books, and a series, about them and Incubi. I will get around to review those works as well in time, but this one, being the one that I adore, needed to be first.