A Review of The Succubus’ Sub – Session Nine: Lessons Learned by John Dylena 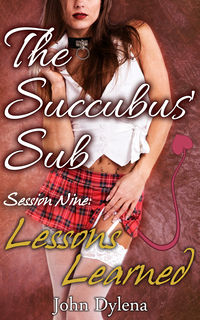 If you think about it, Succubi are the experts in role playing. If you can imagine it, there’s every possibility that a Succubus can make it true. That in itself is an amazing ability to have.

So what happens when things get a little out of hand and something unexpected happens? On the one hand it reveals something important. On the other it asks an important question of not just the Succubus herself, but her Sub as well…

After an eventful weekend, Brett is ready to get back to work. Only Myserra won’t let him.

The morning after a sex-filled night with his mistress, she tells him that they’re taking the day off from work. Instead of meetings and reports, Myserra introduces Brett to roleplay.

But when a third joins their party, things heat up as Brett undergoes a different kind of transformation, one leaving him with a body that is anything but human.

Myserra takes Brett away from the day to day life he leads and brings him into something a little bit different. A bit of fun, a surprise or two later, and then the real shock comes when Brett finds that Brooke wants to come out to play and Myserra makes that something more. But at what cost… That’s the question that remains.

The most interesting part of this work was the role playing that went on between Myserra, Brett. Brooke when she appears, and Heather. It isn’t so much the role playing itself. It’s the emotional impact that Brett faces as a result of Myserra’s actions. He has to come clean about something, something that he didn’t want to talk about. It’s that hesitation, the uncertainty in that moment that I thought was really so very well done.

There’s a lot more to this, and in that comes a transformation which Myserra provides and it changes Brooke in a way that I didn’t see coming exactly. The method was one that I didn’t think of, but it makes complete sense in this universe and I’m glad it was used in the way it was. This provides some very erotic moments between Brooke and Heather, and a truth about Heather that I sort of agree with. It seems to fit her situation, who she is, and all of the teasing and pushing that Heather has done over the series to Brett.

The character development is actually quite a lot for Brett, having to come to terms with his own desires than he has in the past. Heather as well becomes a more vibrant character in the series as well in this work in that her secret is told. But in spite of that, she’s every bit the person she was before… You just understand her motives better and that helped me, at least, to be able to like her more than I did before.

Myserra on the other hand remains very much a mystery emotionally with Brett. By that I mean her true feelings for him haven’t quite come out, but there are hints of that throughout this work that were fascinating to read. The one thing that becomes crystal clear is that she does care about Brett very much and as his Mistress she takes that role in his life very seriously. As she should and as I wouldn’t have expected any less from her.

I mentioned the role playing, and there are two separate scenes in this work of that. Of the two, I felt that the second was a stronger, more emotional chapter in the story. The connection between Myserra and Brett/Brooke, was more… special… I think is the best way to put it. In the first, with the addition of Heather and what transpires there with her and with Brooke as well didn’t quite have the same impact. Yes, the first is more important for what Myserra does to Brett and it leads to the second scene well. I think it was a lighter scene emotionally while the second was more emotionally draining for both Myserra and Brett/Brooke.

The work ends on a very interesting situation, one that I have been hoping to see for some time. What that means going forwards in this series is a really important question. If there is an answer to this, I’m not sure that either Myserra or, for that matter, Brooke will want to use it. When there is a doorway open to you that solves an important question, do you go through it or do you close the door? I don’t think that Brett or Myserra can manage to do that now.

Lovely hot scenes, some real surprises i wasn’t expecting, and that always peaks my interest. Something really important has happened. Myserra, Brett and Heather now have to deal with it… I am wondering how that’s going to go… Somehow I think there’s a surprise coming that none of them expected…