A Review of The Succubus and the Crown by Daniel Garcia 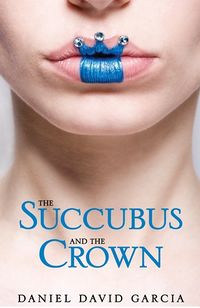 The Succubus and the Crown by Daniel Garcia

I’ll be reviewing the second work by Daniel Garcia today called The Succubus and the Crown. I reviewed the firs book in the series on Sunday and you can find that review here.

I adored the first work in the series and I had some very high expectations for the second work. As a whole I was not disappointed, though I have to admit that there was one part of the story that bothered me slightly.

The thing about being a Queen is that no matter how many are trying to make you what they want you to be, you have to be true to yourself first. If you can manage that, if you can find yourself in all of the things that are pulling you in every direction imaginable… You can find the inner strength to survive almost anything. And sometimes you have to… in spite of yourself.

Delilah thought having supernatural powers was tough … but being the Succubus Queen of New York is an even bigger challenge! Now she must face werewolves, the Council, pixies and a Vampire King who’s looking for a new queen, one who won’t take no for an answer. But what might be even scarier is navigating her relationship with a certain, cute demon hunter, and figuring out if he is or isn’t her boyfriend.

Delilah’s got to survive it all over the course of one crazy night, and it just might turn out that the only ones who can help her are a group of offbeat succubi who show up in the big city looking for refuge.

Good luck and … all hail the Queen!

Delilah is trying to deal with some changes in her life. A new place to work, a boyfriend that wants to be with her, a movie mogul that is courting her. A new best friend who is just a little bit of a fashionista, with her own boyfriend issues. Then comes a vampire who’s a complete pain in the neck, her mother who doesn’t give up, and her boyfriend’s mother who might be just as bad as her own. When things turn unexpectedly, Delilah has to find her inner strength and be true to herself. But the cost… That’s when the crown sits so very heavy on Delilah’s brow.

The one thing about this book was the relationships that formed over the course of the story. There are several new Succubi that appear and they represent a rather wide expanse of Succubi as a whole. That was good to see as, after all, there is no such thing as a Succubi template and in that comes the possibility of a much wider story being told. There is also the relationships growing between Ken and Delilah, Chloe and Jim, the touches of back story that comes from that, where their relationships have gone to and more. Benito, Delilah’s friend, really came to his own in this book. He was a little bit underused in the first work, but in this one he… just makes me smile whenever he appears.

There are the darker side of things of course, and some of them are just bothersome, and to be honest, so far over the top that I was expecting maniacal laughter, the crashing of thunder and lightning when they appeared. Ken and Jim’s mother is too stubborn for her own good, Delilah’s mother can’t honestly be a stupid as she seems to be, but I suppose she is, which really is a shame. Then there is Lex, the vampire king who is, in all honesty, a schmuck. That’s about the nicest thing I can say about him really. There are others that bring in a lot of supernaturals myths and beliefs which really put an interesting spin on things. I particularly liked the cab company that appears in this work, it’s just too perfectly named.

Getting back to the problems that Delilah has, she really does get overwhelmed by all of the things that pull on her as the story progresses. A lot of events are out of her control, some of them are simply a matter of Delilah being true to herself and those around her making some very large errors in judgement. But then, life can be random and in Delilah’s case, it really does get that way more often than not.

There is a tragedy in the work, which I will not spoil, but it really did hurt when it comes. Did it have to happen? That’s something that Delilah will be thinking about and having nightmares about for the rest of her life I think. Here’s the thing though, doing the right thing for the right reasons doesn’t always end happily. But you do the best you can. That’s all you can do. Even a Succubus Queen has to accept that she can’t fix everything… But it doesn’t mean that you don’t try.

The continued building of this world of New York around Delilah became very solidly set and it opens a lot of story paths going forwards. It won’t make Delilah’s life any easier, probably a lot more complicated, but then, she’s not exactly what she’s expected to be. I wonder what would happen if people took her at her word for once. They might be surprised at their own flaws.

After the story comes to a close, there’s a little hint of what is going to happen in the next book and… I’m kind of on the fence about it. I have a feeling that I might know what Delilah’s mother is up to. It is a rather desperate ploy and she’d would be honestly better off to just walk away from her daughter before things go really poorly for her… But she won’t.

I think the writing is excellent, the characters grew as they needed to. It’s a real page turner and that’s a very good thing. There’s only one thing that i felt was a little overdone in the work as a whole. Delilah came up against a lot of people that were against her, or trying to manipulate her, or otherwise gain an advantage over her. It felt like there were two books inside of this one and I wonder if it wouldn’t have been better to stretch out things slightly. There’s a clear point in this work where it could have come to a pause, then begun in another work to tell the rest of this story.

That does not mean that I didn’t love Delilah, the Succubi around her, their secrets, the myths being told, the story of love and friendship. It’s a fitting and powerful companion to the first work in the series and it leaves some story threads open for the next work to have to deal with. But it also meant, for Delilah, that she lost something precious to her. I’m not sure she’s ever going to get over that… But then, Succubus Queens have an inner strength to draw on.

Completely recommended, every moment is joyfully written and told. Easily one of the top ten Succubus stories of the year, and it was simply amazing.

The Succubus in a Black Hat, the third work in the series, appears in August. I’m not sure I can wait that long… Things, it appears, will be very interesting for Delilah.