Succubi Image of the Week 333

A Review of Captive by Felicia Fox 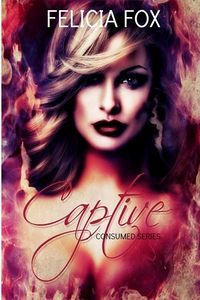 Earlier this year I reviewed the first work in a new series by Felicia Fox called Consumed. As I wrote in that review, I felt a strong connection to the characters, the story was wonderful, and I was waiting, none too patiently mind you, for the next work in the series.

Today on the Tale, I will be reviewing the second work in the series. Captive, which has only added to my love of this author and her characters.

Fate is a curious thing, when you think about it. The reasons for why something happens, how two souls meet, and why they do, can happen for any number of reasons. The thing that matters, when that moment unfolds, is the connection that is made, and just what that does to those involved.

Even in the shadows of something very dark, cruel, and evil, there is something… more. To find one’s soulmate changes everything. Then the question is, what would you do to keep them safe? What happens when those around you aren’t quite as sure about the choice you’ve made as they are? And what happens when your choice is taken away from you?

This, the second work of the series by this author, picks up moments after the first had ended, and we see who Alexandra is, the world she exists in and more. It’s a beautifully told story of the love between them both, those around them, and more. Ever single moment has so much emotion within it that it was a complete joy for me to read.

I had asked, in my review of the first book, for a peek of Felicity’s first glimpse of Alexandra, what happened that drew them together, and what it was like for them both. To my pleasure that was told in achingly beautiful prose at the beginning of this work and it was… simply perfect. More than I could have possibly hoped for, and it spoke of the connection they both felt and still have as the story moves into the present time.

Beyond that reflection of the past, the truths about Alexandra that are told in the core of this work, who she is, where she lives, what she is, are world building at its finest. We learn as Felicity does that Alexandra is rather special in her world, and being that tightens their relationship further. When we see Alexandra’s friends, her father Caius, the court of other Succubi that are there, everyone of them has a personality, a meaning for being in the story and more.

Woven with all of this heat, passion, and more, comes a world which makes sense, does not seem odd or out of place either. It’s so very easy to accept the world that Felicity finds herself in, to ride along with her, and share in what she is feeling and experiencing as the story develops.

I still have some issues with all of the blood in the work, but that is how things are and as a whole it isn’t overly done or takes away from the story, or the heat in it. It also allows for the connection between Alexandra and Felicity to be a lot more than it would be otherwise and I hope that connection is leading towards a singular hope I have for them both.

The other thing that gives me pause is the sudden addition of the character Marius in the story. He is, to be clear, very important to things as a whole, and I can see why he’s in the story. The issue I have is the question of… why? I know that’s vague, but in the context of the story the same can be said there as well. He wants Felicity and is enraged that Alexandra has her which leads to all kinds of problems that carry on to the closing of this work and aim the story towards the next. I’m expecting an answer to the “why” in the next book in the series and I hope it isn’t a throw away reason. For all that he has done, and it is awful, there has to be a good reason for it otherwise he’s window dressing and with how much this author has cared about Alexandra and Felicity… I don’t think he is.

I absolutely adored the first work in this series, and this, the follow up, was everything that I could have hoped for and more. Much is revealed, the universe is richly populated with complex characters, settings, and moments. Every word tells of this author’s love for her story, which for me, means everything.

I honestly can hardly wait for the third work in this series, Crave, to appear in August 2014. The series has not disappointed me and where the story goes from here I really want to know…