Not quite a Devilish Delight so far as a costume…

A Review of Dark Initiation: Confessions of a Succubus, Book 1 by Becca Allyson 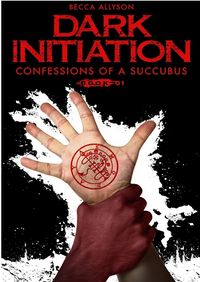 Dark Initiation: Confessions of a Succubus, Book 1 by Becca Allyson

One thing that I really look for when a series about Succubi begins is that there is history in it. By that I mean, at least for me, it’s better that we learn about the main character, her past and where she is at the beginning of the tale. Without that hook the series really has no hold on me to continue it.

That makes the story, and series, better.

What’s it like to have sex with a demon? Rachel’s about to find out.

Rachel Moriarty led a quiet life, studying for a master’s degree in psychology while working at a book store. She never imagined it would all change in a single day, at the hands of a man she’d only just met. She sensed the predation in his eyes from the start: she saw the way he watched her, knew he wanted her.

But she didn’t know this sexy, mysterious man who claimed to be a visiting professor of religious studies was actually the High Lord Asmodeus, one of the seven dark princes of Hell. When she discovers the truth—his true being—he gives her a choice that will change her life forever.

Rachel, when we first meet her, is… lost. That really is about the only way I can describe her because her emotions, character, and purpose seem to be at a crossroads and she desires something. The problem is that she doesn’t know what, or why, that is. The people around her don’t interest her very much and in that comes a sort of separation between herself and the rest of humanity. Then Dey appears.

Dey, from the moment he appears is… different. And he’s well aware that he is different. He is searching for something, or rather someone, and Rachel finds herself the focus of his attention. There is a touch of what seems to be mind control, or more accurately, emotional, sexual control, that he has over Rachel which sets a lovely undertone of heat in her.

The part of this work that for me was the most captivating was the discussion that Rachel and Dey had over dinner. Some might expect that to be a boring thing, but it is the heart of this part of the series and it asks many questions. The discussion over theology, life, belief where points that were considered and I found set out much more of Rachel’s beliefs and personality. In doing so the author gives her a grounding, a meaning that adds to her character. The same can be said about Dey himself in that his view of the world, and in particular, Rachel, comes to the fore.

When the moment arrives that Dey and Rachel become intimate together, it is with a sense within Rachel that something different is going to happen. When Dey reveals himself to be Asmodeus, it was slightly disappointing in that he seems to become somewhat stereotypical in his appearance, hooves and all which for me is a bit of a turn off. When they are together, he is very dominant over Rachel, which given his attitude and actions earlier in the story is a bit of a contradiction. He takes her, transforms her and then some questions come as the story comes to a close.

One is that we actually do not see what Rachel looks like when she is transformed. The actual transformation is slightly horrific and it comes to an abrupt close. I have a hope, a small one, that somehow she doesn’t have hooves, but based on what has been seen so far, that might be a fleeting hope. The other is that there is a huge hint about what Rachel intends to do, and in that comes the question of how she might do so and what are the implications if she manages to succeed in her goals. Both will be questions that I think will become the core of the series going forwards.

The work is written well, there are really no flaws to be seen. Perhaps I would like to have known Rachel more in her human life than we do as there seems to be questions about her past that seem to be important but are slightly glossed over. But then there is more story to be told and in that I believe will come the answers I am looking for.

A promising start for what I hope will be a story that seems to be about a Succubus that  I can appreciate. I’ll be looking for the next work and where the story goes from here.