A Review of The Succubus’ Sub – Session Eight: The Bond Between Them by John Dylena 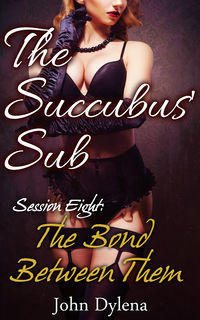 The Succubus’ Sub – Session Eight: The Bond Between Them by John Dylena

One’s past is something that will always define you. Who you are can be seen in those around you whether you like that or not. More importantly, the past can show you something you might have never understood before. The thing to wonder about, when that happens, is what you do about it… and is it really you?

Every day after work, Myserra transforms Brett into Brooke and has him clean the condo in his maid outfit. After declining the offer to be a maid full-time, Brett receives a phone call from his mother reminding him of his dad’s birthday. Having lived in the shadow of his parents and brother his whole life, Myserra decides to go with him as his girlfriend Mya.

But when someone at the party spots Brett’s collar, he is pulled aside and questioned about the woman he came with.

The succubus he admits he has feelings for.

They say you can’t go home again. In Brett’s case that’s very true. But with Myserra at his side even the most uncomfortable of places to visit, the home of Brett’s parents and his family, can turn into revelations for them both. And in that comes something Myserra didn’t fully understand either…. but she will.

For me one of the most interesting aspects of this work was getting a glimpse into Brett’s past. It told a lot about him, his feelings, his past, and how he sees himself. More importantly, it also gives Myserra a look into what she has done for Brett as well. Understanding is everything in a relationship, and with a single visit, that becomes much better between the two of them.

Brett’s family is interesting, they have their own quirks and personalities which were very clearly defined from the moment they appear. But it is when Brett compared himself against them, and expresses what bothers him the most, that tells a lot about him. More so when his thoughts about what has happened since he met Myserra come to the fore and there’s a moment in that which, for me, defined the relationship Myserra has with Brett clearly and well enough that it changed Myserra’s character.

There are some truly lovely moments through the work, Brett and Myserra walking up the steps to visit Brett’s parents. Brett taking a phone call while still Brooke and how that goes, especially the reaction from Myserra. Brett finding out something about his family that he didn’t know and how that relates to Myserra. All of this is really wonderful story building and more it adds to the characters of Myserra and Brett in that they have a more revealed backstory which I felt was needed to fill in some gaps about them.

That surprise that is revealed about Brett’s family is something that feels like it will have a huge bearing on the future of the series, much like Heather has had in the past. As well, towards the end of this work there is a moment of introspection that Brett faces that is both heart-breaking and heart warming at the same time. More so, the revelation that Myserra comes to accept ties this work up nicely and where it ends is exactly right for the two of them.

The only thing that bothered me was that the story felt… rushed. It seemed like things were running on rails towards a destination, which was, to be clear, a completely satisfying one for me. But I felt like I needed a little bit of a breather between the reveals and surprises. None of them were immaterial, they all had purpose without a doubt, but a little more padding in the story, a few more funny moments between the seriousness… I think I would have liked that.

Written very well, not a flaw in the writing that I could see in grammar or spelling. Again, all of the characters were written to tell a story, and it gives a turning point for the main characters in the series. Where things go from here? That’s going to be fun to see…

A neat little signpost in this story that turns the series towards something… interesting… as I had hoped it would. The action was a little too quick, and felt rushed which really is the only flaw to what otherwise is a solid work in the series.