Succubi Image of the Week 332

A Review of Hunger Embraced by Jennifer James 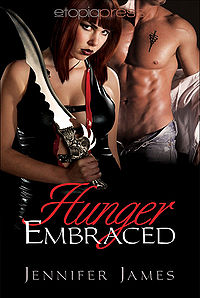 Sometimes the concepts of Succubi, and Incubi for that matter, get a little bit entwined with vampires. Sometimes that really doesn’t work, mainly because the two concepts really don’t work together well. However, if you take a slightly different view of both sides of things, you can, if you try, come up with an idea that makes sense, works well, and most importantly, helps to create a uniquely hot, passionate, and adventurous story.

What happens when what you are is hidden from you, then confronts you and then destroys what happiness you had. What is the result when your refusing that which you are for years on end, draws others to you who want you for their purposes and care nothing about you?

Who do you turn to and trust? And when you figure that out, is it too late already?

She’s fed up with being fed on.

All Miranda Thibodeaux really wants to do is survive corporate hell and be left alone. But as the daughter of the Incubi king, being left alone isn’t on her schedule. And as an avatar to a goddess with multiple personality issues, taking things in stride isn’t either.

Daniel looks like an ordinary surfer boy–T. T. B.–Tall, Tanned, and Blond. Hot he may be, but ordinary he’s not. Beneath the pretty packaging lies a ruthless warrior, a servant to the Vampire Council. His mission is to find Miranda and present her to the council, then get the hell out of Dodge before he loses his focus. The last thing he needs is the distraction of the testy female.

When circumstances force Miranda to turn to T.T.B. for help, they both end up with more than they bargained for. And that normal human life she wanted? Not really doable when everyone wants a piece of her…

Miranda is not quite human. Born of and Incubus father and a human mother, she’s suffered for what she is and has tried to put that part of herself far inside and locked it away. But in spite of this, the vampires around her come to feed on her, she resists her nature and things turn badly. But she finds that there is a way out, not the easiest of choices even as her world bares down upon her.

The concept of Incubi in this work is that they are a kind of vampire who feed on sex with some blood as well. They aren’t quite what one might expect, but they have some powers of persuasion, a hint of mind control, and a need inside of them that they learn to embrace. Miranda, being partly Incubus in nature, though really considering what happens through the story, I would have, at some point had her claim to be a Succubus, has to deal with that part of her.

Her character is a complex one, and really it’s one of the more interesting ones that I have read. The battle within herself made me smile when the truth about it was revealed and I really enjoyed what it became when she came fully into her powers. There’s also a interesting thread about her and one specific Goddess that fit well and with that also came a unique power she wields when fighting that also fit her well.

She isn’t a simply blood thirsty vampire, but she does have to deal with some of them through this work and save for one character, who is a never-ending source of problems, what happens to them seems to be very justified as the story goes on.

Her quirky attitude, especially about candy, jelly beans for one, her reactions towards the neat-freak behaviour of the vampire she encounters and becomes involved with, made me laugh and that endeared her to me even more. There’s just so much character in her, so much untold history, that she quickly became very real in my thoughts.

Daniel, the main male lead character, is achingly complex and with that comes an attraction that builds between himself and Miranda that isn’t just dropped into the story for the sake of it. They have to battle their way towards it, the moments have their joys and pains, their ups and downs and it isn’t perfect. But that makes the story all the better.

There is a wide and varied supporting cast of characters that appear and pull Miranda this way and that in the story and that pushes things towards a rather bloody climax, which has to happen the way things unfold. But before getting there, there are several very hot scenes of erotica that I enjoyed to no end. The moments between Miranda and Daniel are delicious and so very hot and I enjoyed them very much.

There is a lot of blood in this work, since it does have vampire characters, and that leads towards a climatic battle for Miranda, Daniel and one other against some really horrific opponents. Once past that, the story concludes with some interesting teases and a final cliffhanger that really made me need the next work in the series. But as of this review, that next book has not appeared. And that’s a shame.

Lots of promise, well written, hot in the right places with really good characters. All in all an almost perfect page turner… I just would have liked, I think, a little less blood here and there.

I really do want to see the next work sometime, I hope it happens. There’s a wonderful universe to play in, and in that comes a lot of questions that need to be answered. I would like the blood and gore to be toned down a little bit… The heat is just fine where it is.