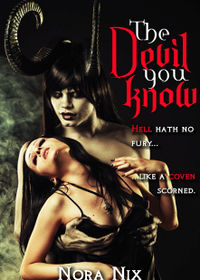 The Devil You Know by Nora Nix

An ongoing series I’ll be reviewing this time on the Tale. Nora Nix has published, as of the date of this review, two works in the Devil You Know series. I mentioned that I felt they had written other series and works that were, for me at least, better. These two works, and I hope the ones to come in this series, show that I believe.

When one makes a deal with the Devil, someone has to pay the price. When that someone has no redeeming qualities, then the price paid becomes more dear…

Rory Anderson loves to take advantage of women. When he crushes the heart of his newest conquest, a sweet sorority virgin named Delia Sanderson, he feels like the big man on campus – until he wakes up as a girl! Worse yet, he’s in the arms of an incubus summoned by the witches he’s spurned. Can he atone for his sins without submitting to the infernal beast? Or will he give in to his new desires?

Rory is, to be quite blunt, about the worst example of a human being that one could possibly encounter. As a whole, from the first instant he appears, it is quite clear that there is not one redeeming quality about him. Self-absorbed, cruel, and most of all, has an opinion about women that really needs an attitude adjustment. Not that his friends aren’t all that much better really. After causing Delia, his latest victim, to try to kill herself, and then care at all about it, things happen. Delia’s friends are witches, they summon an Incubus, and Rory finds himself transformed and seeing what he has done to others from their side.

The Incubus, Ashonoch is described as a monster, which he is in many ways. Overall he is somewhat stereotypical in form and his personality is very dominant in character. There isn’t really a lot of character development with the Incubus as his purpose is, after all, to teach Rory a lesson. His actions, mental, physical, and sexual towards Rory are as brutal if not more so, than what Rory did to others.

Ashonoch is the catalyst for Rory’s punishment and it is an odd mix of dreams and realities that meld together which brings about Rory’s gender transformation. After this comes the punishment which is every bit as painful emotionally, physically and otherwise.

There is a certain amount of justice that happens through this, and the aftermath is telling as well. But in all of this, more than anything, it is remarkable how long it takes for Rory to understand, finally, just what he did and what the women around him face everyday. It isn’t a happy story, not by any means, but really it isn’t meant to be. It is a story about karma coming to bite someone in the rear at last.

It is a violent work, there really isn’t any other way to explain this. Still, it is meant to be considering who Rory is, what he did, and more. Well written, a touch of mind control mixed with the gender change worked well and it is a good beginning to the series. But how dislikable Rory is bothered me a lot as I read.

Then comes the second work in this series: 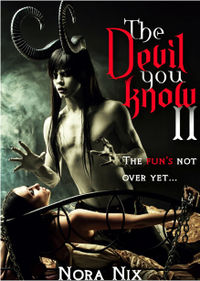 The Devil You Know II by Nora Nix

Rory’s group of friends, are, to be blunt, not any better than he is and in that their past comes to haunt one of them as well.

Discoveries are made and in that comes further fates being bestowed by the Incubus. But are lessoned learned or is the fate faced more overpowering? That’s an interesting question to ponder…

After Rory’s strange and sudden disappearance, Zach, his best friend, decides to solve the case himself. When he breaks into Delia Sanderson’s sorority house looking for clues, he stumbles upon their secret – they’re all part of a coven of witches! Worse yet, they’ve just summoned an incubus that seems far more interested in him than he is in them. Will Zach escape? Or will he suffer Rory’s fate?

Zach is faced with the mystery of where his friend Rory has vanished to. Remembering what happened, he enters a sorority house and discovers what Rory already knows. They are all witches, they’ve summoned an Incubus… and Zach is next to suffer the Incubus’ attentions.

Ashonoch plays a slightly larger role in this work in that there is a story which explains why he is there and what he expects out of the coven. The violence that occurs through his actions is no less than it was in the first work however. While this is the core of the work, there is quite a lot of background given about the coven, the deal with Ashonoch and that is what interested me.  I wonder about what the witches have gotten themselves into by summoning Ashonoch. It isn’t clearly said what is coming, but the hint is there and I wonder what that will be.

Again, a well written work which leaves some questions unanswered and opens the door towards many new ones when it comes to a close. It is violent again, as the first work was, but the dislike I have for Zach is much less than what I had for Rory. That’s not to say that what happens isn’t deserved, but in truth I wonder if it really wasn’t considering Zach’s reasons for what he did. Between the two works, I found this, the second, a better read and more involving story wise.

As a whole. the series has a violent edge on it that I didn’t particularly care for. There is a point to it however so I can accept that. The question that remains is all about Delia… Perhaps there will be an answer about her sometime as well. Where the series ends up from here will be interesting to see and I’m looking forwards to that sometime from this author.