A Review of The Wielder: Sworn Vengeance by David Gosnell 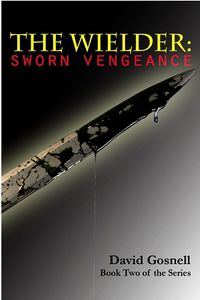 Today I will be reviewing the second work in The Wielder series by David Gosnell, Sworn Vengeance. I reviewed the first work in this series, Betrayal, here on the Tale and I really was so very enamoured with the story, the characters and the work this author created.

It has taken me some time to do so and in that I did not read the first release of this work, rather I read the second, and that I think is a salient point to make here so that my thoughts can be connected with the proper version of the work.

The thing about vengeance, or more precisely revenge, is the question not of the means. In truth the means isn’t what matters in the end. What really matters is what the consequences of finding that moment can do.

That’s a question that few ever really consider themselves with.

After sending the dzemond soul reaper Maldgorath running for his life, you’d think Arthur MacInerny’s life with the six spirits grafted to his soul would have become a little simpler.

Maldgorath not only takes a shot at revenge on Arthur and his band, but plunges the world into turmoil. He attacks Rome with thousands of his summonlings, which sets his grand plan into motion. That plan is use radical Islam as a lever to create chaos among the world’s religions. The world turns on itself and Arthur along with others have to go into hiding.

But Arthur isn’t one to stay on the sidelines. He is sworn to vengeance against Maldgorath not only for the death of his son, but for the family of the warrior he killed while duped into thinking the church was responsible.

The second installment in the six-part series, follows Arthur, his band of summonlings and other friends he’s picked up along the way as he pursues his Sworn Vengeance.

Arthur’s life has become somewhat more complicated in the time that has passed from the first book in the series to this one. Having been on several missions with his summonlings, doing the right things for the right reasons, the world starts to come apart at the seams thanks to the being that cost Arthur part of his family. Now facing a situation where the question to be asked is who do you trust and who can you turn to, he sets out to stop the oncoming terrors and somehow stop them.

While that is the core of the story, there is, at least for me, a more interesting thread that runs alongside of this. Silithes, the Succubus of this series, has always seemed to be something more than she appeared to be. In this work, that becomes very clear and as it does there is a fascinating background told about her, and of other Succubi. With that comes something that I thought was true, that Silithes is, truly, so much more than a “pretty” thing. That point, the secret revealed, what it does to her, and what in turn happens between herself and Arthur, that I thought brought out so much more in her character.

With all of these revelations about Silithes and her past, another Succubus appears who I thought added a dimension to Succubi that reinforced that they are most than what they seem to be. That I think opened the door towards several possible paths for Silithes’ story to take and I do wonder about them. The concept revealed, by itself, is something that explains questions about the Succubi, and to a lesser extent, Incubi in this universe.

As for the other summonlings that are connected to Arthur, there is also a focus on Sheyliene, the fairy and in that comes a story about her that hurts so very deeply and with that comes some very desperate questions about her. She is hurt, so deeply, and where that will go in the future is something that is concerning. As for Arix, Vetisghar, Hjuul and Pffiferil, their characters are developed somewhat, but not to the same extent as Silithes and Sheyliene are. They have their moments, some wonderfully funny at one point and so very deeply sad in the next.

With the focus on Arthur comes the question of Znuul. He is, at least in my thoughts, becoming more and more the “evil, but not really so” dragon that I do enjoy when he appears. I had hoped for these two to become closer somehow, friends if they could, and there is one scene in this work that really spoke volumes about who Znuul is, what he fears most of all, and why that matters to him. All in all the connections here are well told and are very real.

There are several different plots that run though the work, some of which are shattering in what they foretell to the world around Arthur. There are some difficult scenes that involve those that are supposed to be allies, and others that are of a lighter tone. All of them are well told stories in their own right and add to the characters depth very well I thought.

The climax of the work is both satisfying in one way, and worrisome in another. It does lead, really quite well, towards the next work in the series, leaving some very difficult questions to be answered. Alongside of that, the last moments of the work, which push Arthur towards something that he had been thinking about, but never did, leave questions as well. As a whole, the work closes the book to one plot, but opens another and it is a worrisome one as well.

Compelling characters, well told, with a story that is gripping. The only thing that I wish for is a little more time in the editing please? There are some errors here and there in the work that need to be taken care of to make it read better. They are not many, but with all of the story, characterizations, moments, and emotions in this work, it is a shame they crop up now and again.

The story is compelling, the characters grow in such fascinating ways. All that is revealed about Silithes just was right in every sense of the word. There really is so much right about this work and I know, fully, that the next work in the series will be as gripping. Just please, a little more time in editing would be all that I ask.

I will be watching for the next work in the series… It will be something to see where everything goes from here.