I can’t see this costume starting much of a fire…

A Review of Sissified by the Succubus by Nora Nix 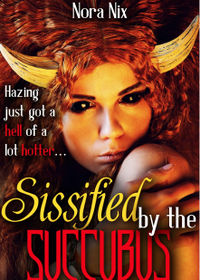 Sissified by the Succubus by Nora Nix

Not all stories with a Succubus in them are about the Succubus herself. That isn’t to say that she isn’t any less interesting or that there are questions about her that need to be answered. Many times the Succubus is a means to an end. Someone to push the story forwards in some shape or form.

The question then needs to be asked if the Succubus really makes a difference to the story and if they weren’t there would it matter? Sometimes it doesn’t for where the story goes.

Greg is a pledge about to try to pass the last hurdle and be accepted. He fails however and in doing so discovers that failure leads to a Succubus having her way with him, and then everyone around him doing the same.

As a whole, at least for me personally, I found the story too violent for me. There is a lot of suffering that the pledges face and it did nothing for me at all. While it was used to push the story forwards, and I understand that, I couldn’t find my way to actually enjoy the story being told for all of the hurt and pain that is seen. That is the characterizations of course and it is needed to bring the story to the point where the Succubus appears. But I found it took up too much of the overall setting and story. I don’t think as a whole it needed to.

Eventually Solaria, the Succubus of the story appears. She physically is very much a dominant being, powerful and while she isn’t quite stereotypical she confuses me. By that I mean her relationship with the one that summons her seems… off. There’s something that doesn’t fit with her personality and what happens with her there. I wondered who really was in control and why as the story unfolded. While the summary tells of her wanting power, in the story itself I didn’t quite see any sign of that being told.

Solaria is mainly used as a means to transform Greg’s gender and then the somewhat over the top sex scenes begin with Solaria watching. When the climax of the story is over… it seems to be lacking. By that I mean Solaria’s reason for what she did, why it happened and so on seemed to be very tenuous.

But that I think for the core story wasn’t the point. Solaria was there to make the rest of the story happen and then move to the background which is basically what happens with her. As a story about a Succubus, this work does not focus on that. It focuses on Greg’s transformation, what happens after that, in all of the ways it does, and then the story comes to a close.

Well written, very descriptive scenes and the characters have some depth to them in a story that has some heat in it. The problem is that heat is muted somewhat by the actions of some of the characters and who they turn out to be.

Solaria isn’t the focus of the story, and that’s fine. Still, she’s interesting and I would have liked to know more about her, why she is involved in things and what she wants from the others. The main problem for me was the violence in the story. There are better stories by this author and I’ll review a series by them next Tuesday.