Succubi Image of the Week 330

A Review of Ravished by the Wolf by Ashlee Alexander 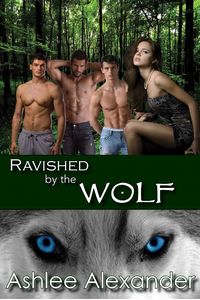 Ravished by the Wolf by Ashlee Alexander

The second part of two works by an author that has a Succubus make a connection with a family of werewolves. If the first part asked what happens when the walls come down, the second part wonders what would you do to keep what you have been given?

What could you face, suffer, and survive in order to see that the one you love, more than anything in the world, that kindled the love within you thought lost?

Sometimes it means facing the darkest part of yourself…

So…you want to be packmaster?

When Catherine met Gerard Lockhart, she knew he was no ordinary man, and neither were the two men who were with him. From that night on, her lonely streak ended, and a new world presented itself, filled with passion, sex, and danger.

Gerard had no intension of staying in Clarksville, but that all changed the moment he set eyes on Catherine, knowing that she too was not all that she appeared to be. Faced with the prospect of having to fight for dominance in his father’s pack, this wolf is about to bite off more than he can chew.

The story of Catherine and Gerard continues in this work, the plans of others revealed, the reasons for his being there made clear, and, in the end, they both make decisions that effect their lives in ways they never expected.

One of the more interesting parts is the reaction of the others in the werewolf pack to Catherine… especially the women. But in that, there was something quite simple forgotten, When you find someone to love, you stand by them and you can, truly, do anything for them if need be. And Catherine needs to.

I was slightly disappointed when her true form appears in that we only learn of the reactions from others, the sounds of the moment and a flash or glimpse of what she might look like. I wanted to know if she was what I thought she might be, but that didn’t happen. What does however is Catherine finding more about herself through Gerard and his family. They speak of her darkness and other hints which I thought could have been expanded on more than they were.

But truly this work is mainly to draw Gerard into the climax of the problems with his family and push Catherine into accepting who and what she is. After so many years of fighting her nature, she gives it full control now, unafraid, and wanting to belong… And woe to any that try to deny her now…

There was, again, a little too much blood for my liking. I just couldn’t accept that Catherine needed to feed on the energy of others and feed in a more feral way as well. I do think that part of her is a reflection of Gerard, which makes sense, but it just didn’t quite work for me.

While the main arc of these two stories comes to a satisfying end, there are many threads left open and I can see this work continuing on, possibly focusing more on the other members of the pack and their relationships with Catherine. Somehow I think that what they thought she was only good for isn’t what they believe now…

I would have liked to know what Catherine looked like in her “true” form for one, a lot less blood for the other. There is more story I think, though it has never appeared as much as I have looked for it. It’s a shame because the questions are still there from the first work… and I would like to know some of them to bring some closure to the series in my mind at least…