Not that Lucky as a Succubus Costume really…

A Review of Surrender Sweet Succubus by Jewel Quinlan 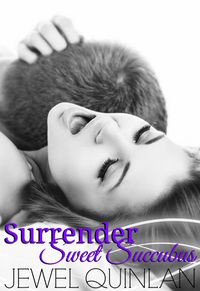 I’ve said many times that my view of Succubi is… different. I believe that they are more, can be more. There are very few stories about Succubi that I can truly say have something in them that has made me cry, wonder, and, perhaps, believe in what seems to be impossible.

The impossible is only that which we believe it to be. When we find that our reality is, in truth, what we shape it into, then we learn something about the universe, and ourselves.

When Dr. Stephen Wallace, a fertility specialist from Sydney Australia, is approached by his brother and sister-in-law for help conceiving a child there is no way he can refuse. Since they have already exhausted all the possibilities modern medicine can provide, Stephen turns to his skills as a shaman for alternative solutions. His search leads him to Las Vegas, Nevada on a slim lead to capture a succubus who he hopes has the power to help. But when he meets Geneva, the exotic and passionate succubus, he finds himself being captured instead.

It’s a very rare story that hits home to me personally. This one does. The thing about this story is that it brushes against some of the things that I hold most dear in my life and that of the Succubi Queen me. I went into this work hoping for a story that might, even if only a little, meet the high wishes and expectations that I have. I was not disappointed.

Geneva is a Succubus, but not, in any way, a stereotypical one from the first moment she appears. Her personality jumps off the page and shines through the rest of the story. She has history, she has wants and needs. She is looking for something, has been for a long time. That’s not to say that she isn’t aware of what she is or what she does to those around her. She’s well aware of it. But even having that when she meets Stephen… Things don’t quite go as they have in the past.

Stephen is possibly one of the most wonderfully caring, intelligent, and dynamic personalities that I have seen in a Succubus story for some time as well. He’s not a “typical” male lead cardboard cutout. He has a personality that is every bit as strong, interesting and deep as Geneva’s. More, he has a purpose, one that, to me, makes him shine.

I think the best way to look at the two of them is that they are, at least in my mind, each other’s Eternal. Their first meeting, and the events afterwards, aren’t exactly the best of things and Stephen does something he regrets as well. But he makes up for that, fixes it, and in doing so discovers that some souls are meant to be together… It’s the together part that takes a while to happen sometimes.

The plot is a touching one, both in purpose and the events that comes from it. But it turns into less about the initial plot and more into the discovery between Stephen and Geneva. The threads that have been around them, and not knowing. The little barbs and quips that are just right. The thoughts that Geneva shares as the story progresses.

I especially liked Geneva’s explanation of the Succubi and where they came from and, more importantly, exactly who and what they are. It’s one of the best and most well thought out concepts for Succubi that I have seen in sometime. With that comes history, relationships, and meaning that I don’t often see in Succubi stories.

There is, and this is important for me personally, logic to Geneva and Stephen’s powers and their relationship to the world around them. It’s not a waving of a hand and things happen. There is depth to what happens around them and between them which adds so much to what is a wonderfully romantic and touching story.

The ending is touching, with hope for the future and in that comes a personal wish… I’d like to see more of Geneva and Stephen. There are hints of their future and I would love to see that. Their story doesn’t seem to be over and, in all honesty, I’d like to see how the two of them change as things continue forwards.

A wonderful moving story with characters that feel the aches and wishes within them. A beautiful story of the need within and the hope that surrounds. I hope dearly for more about Stephen and Geneva as their story is far from done and that question, of where their story goes, will be with me…

Highly recommended and personally inspiring. One of the top ten Succubi stories of the year.

Now if only there is more… I’ll hope so.