A Review of Succubus Fun Times by Sinn Lee 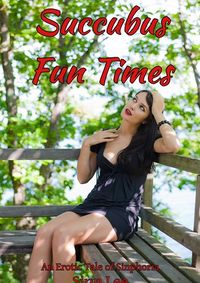 I find it interesting how some writers create a transformation scene when it comes to Succubi. Some of the transformations are over the top, or horrific. Sometimes they are not quite described as glossed over. Occasionally they are done well and it makes for a much better work to read.

There is one thing that I have noticed of late about quite a number of stories about Succubi as well in that the authors seem to find making them… different in a physical way adds to the story as a whole. I don’t mind when they actually do, but when they don’t, or it doesn’t add to the story… Then I have a problem.

And so does the story itself.

Cynthia had tried various drugs in the past, but she would have never expected what happens when she takes the plunge and buys a dose of this new drug known as Ero. This tale takes place in Sinphoria, a Sci-fi universe where science prevails over mysticism, but not everything is easy to explain.

Cynthia’s friend tells her to try a new drug, but that she needs to do so when he’s there. Of course she takes it alone and the effects of the drug happen to attract the attention of a Succubus. When Cynthia agrees that the Succubus can do anything to her that she wants… Cynthia finds that her world is turned on its head.

There are really two Succubi in this story. The one that starts the story and then the one that Cynthia becomes. They are both interesting in their own ways as well. The Succubus who transforms Cynthia is never named, which always bothers me. She’s also not quite what one might expect in a Succubus as well. Overall, from an aspect of heat between Cynthia and her it worked well to make her different, and it is quite clear that her motives and desires are that of a Succubus as well. She makes for an interesting character through the story, but there is so very little told about her as the work focused more on what happens to Cynthia and what happens when her friend “helps” her.

Cynthia’s transformation isn’t actually seen in this work, only the aftermath, but her emotions and actions I thought came out really well and made complete sense. When she asks her friend for help, the twist in that tail was very smoothly incorporated and when the mind control erotica part of the story came into play the shift within Cynthia was subtle as it needed to be. The heat that came from that going forward also was told with style. The only problem really was that it was too short for my taste and I would have liked to see more of what Cynthia felt, saw, and understood in all of that.

The main problem I have with this work is that it is far too short. There is a lot of heat, there are some interesting characters placed in interesting situations. There is a lot to like about the story as a whole… But 12 pages in itself is not enough to really tell the story that begun here. There is an obvious lead into the next part of the story, but it hasn’t appeared and as the author seems to see this work as a “one-shot” it is unlikely that the cliffhanger, for Cynthia and her friend, will ever be resolved.

The universe the author created, a mix of magic and science, really seems to be interesting and I like the depth to the story as a whole. It wasn’t really developed too deeply, but it did offer glimpses and that in itself makes the universe, and series, interesting. The bothersome part is that with that depth the story as a whole is too short and it needs to be at least a good deal longer as a result.

Lovely heat in the erotica, the mind control aspect of that was very well done and enjoyable to read. The scenes meshed together well and I liked the moments of discovery, panic, and comprehension that Cynthia went through. She turned out to be an version of a Succubus that I don’t see often. It would have been nice to see more of that. The same is true of the unnamed Succubus that starts all of this and continues it onwards, but she needed to be fleshed out a lot more than she was.

Too short by far. That’s not to say that the story isn’t interesting, that the transformation didn’t intrigue me and that the touch of mind control themes wasn’t done well. All in all the story has a lot of promise going for it… The issue for me is that it comes to an abrupt end and that happened just when things were starting to get interesting… I hope there will be a second part, there’s a lot more to tell it seems and I would like to see it.